Last night I spent time setting up a kid's room. I don't know why. LOL It's just fun to do.

Btw, Flickr STILL hasn't re-reviewed my photostream so I'm still on my new one. If you could add me, and add me to any groups you think I'd be interested in, I'd appreciate it. I miss all of my Flickr groups so much. :( 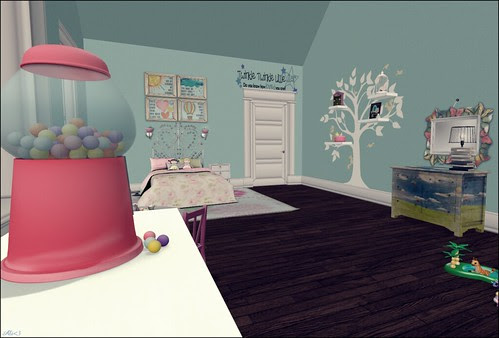 It's Monday, so you know it's time for a meme from Berry! Today she's asking us about groups.


Have you reached the 42 group limit?

Right now I'm only in 36 groups, which surprises me. I'm usually hovering around 40, but I've left a few event groups lately because the events are over.

Do you do a lot of group hopping to keep up with all the groups you want to stay a part of?

Not really, but mostly because the majority of my groups are blogger groups and they're invite only. I am in a few store groups, but the ones I stay in are the ones that are mostly pay groups now and I don't want to leave. [More on that in a minute.] The other groups are land groups that I need to stay in.

What makes you want to join a group?

Well, with the blogger groups, that's easy. I stay in them for review copies and event information, and sometimes to chat with other bloggers. If a store group wants me, they need to pony up with some incentives. Unfortunately, a lot of them don't any more and that's kind of sad. I used to join a lot of store groups when I was new, even if I didn't really know the store, because of a gift they were giving. Some of the stores I still frequent today are because of that initial gift. I am in one social group [my own] but we're not as social as we used to be because some of my friends are no longer in SL often, and group chat for a while was so spotty, it was impossible for us to chat any way so people moved on. I'm still friends with most of them on plurk, so I guess it doesn't matter really.

A lot of store VIP groups have a group fee which you have to pay to join. How do you feel about paying group fees?

I hate - HATE - group fees. Not because I'm cheap. Trust me, if you have a wonderful group with lots of incentives to join, I will happily pay the fee. But most of them do not. Yes, a discount on your items is nice, but it needs to be instant if I'm in your group, not one of those store credit things. Those are awesome and I like them, but not if it's group based. Plus, what's with the $1k and up group fees??? They say "Oh, our gifts are worth it." But seriously? I don't find that's the case 99% of the time. One recolor of an item every 3 or 4 months is not worth someone ponying up $1000L or more. I also tend to feel kind of trapped in a pay group. Like, okay, I paid the fee - now I can't leave because I don't want to pay again. Especially if it's a group that rarely does any kind of gifts or discounts. A designer might think they are worth the price, but we have limited group space. Make it worth our while to be in your group. Also, if you don't have a current group gift out, consider having free open enrollment once in a while just to get more people in your group. The more people in it, the more people remember to come shop you when you do a new release notice, you know?

Name a few groups that you are a part of that you feel everyone should look into joining and share your reasons behind that.

The Gos Boutique group is a good one, if a little chatty, because of the 10% discount on items and sometimes Gos has an awesome group gift. The price is also only $50L to join regularly, and $500L if there's a group gift out. You get 10% back on your purchases if you're in the group, so you do make the fee back quickly if you shop often. The Stellar group is also great because Lexi does at least one monthly gift, sometimes more. It's a $250L joining fee but you do make that up in gifts. The SLink group is chatty and helpful, even about things that are not SLink related. If you don't like a lot of group chat, it's probably not for you, but you also receive a discount on items in the store, and it's only a $10L joining fee.

The rest of my groups are land and blogger and event based, so I can't really recommend them because you can't join them. LOL

Man. I need to be in more social groups.

Oh I didn't know about the slink group, joining that now!