But Not Purple Rain!

Just to do the business stuff, I still have the parcel available that I talked about in my last post. IM me to check it out!

Tonight we had a birthday party for my great-niece Tess! It was a Disney themed princess party! There was great music and lots of friends and family. By the time we took this pic, most had gone to bed, but you can still see how cute people looked! And also, I think all of them were smiling but I was really lagged out for some reason and didn't catch everyone's smiles. They were happy, I promise! 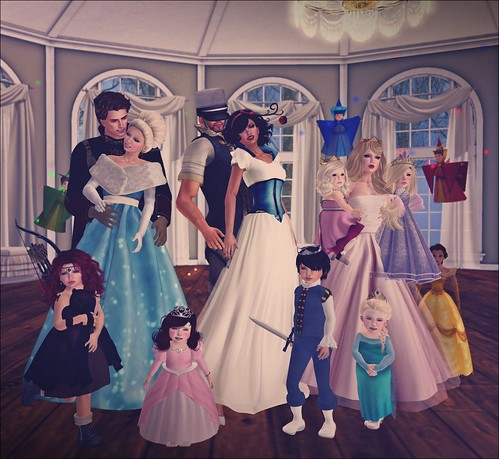 The guys, of course, couldn't be princesses. [Well, not that there's anything wrong with that, but they're not really the princess type!] But there's not really a whole lot in the way of Disney guys that are royal and even less if you're trying to find any kind of a royal outfit in SL that is in any way current. When Aldwyn and I were talking about costumes last night and I told him the theme and he should be a prince, immediately I had to say, "But not Purple Rain!" Because...well...after almost 5 years together, I know him.

He came late to the party and I wasn't really sure WHAT he had chosen to wear. When he teleported in with a huge flash of light and sparkles, there he stood, He-Man, Prince of Eternia. [Well, technically, He-Man isn't the prince when he's in his He-Man get up, but we'll let that slide.] At this point, the girls were threatening to stop being Zanzibars and Abby went to hide under the stairs. Then he changed again into... Prince. PURPLE RAIN PRINCE. This is when I threatened to stop being a Zanzibar as well. *laughs* But finally he put on a decent royal outfit and I allowed him to be near me. 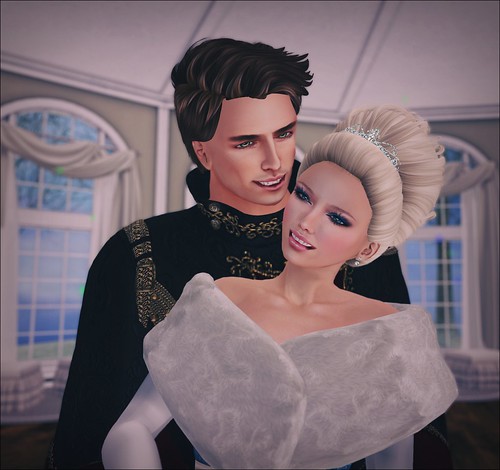 But all in all, it was a super fun party. The girls got lessons in being princesses [like hold your dress up when you walk down the stairs so you don't fall but not so high up you show your underpants], and the place was super pretty, and the music was great. I just love my family and our friends! Our parties are always so fun! :)
Posted by Alicia Chenaux at 11:25 PM

So much fun! And I love that picture of you and Daddy <3