So as part of the whole "I'm tired of our parcel looking like crap" thing, I decided I wanted to move our house. Should have been a simple thing. I have mod rights for pretty much everyone in the family at this point, so it should have been as simple as unlocking the house, selecting everything, and scooting it on over. SHOULD HAVE BEEN THAT SIMPLE.

Somewhere along the way, random things of mine in the house got locked down. Not just the house, not the walls I built downstairs and in our bathroom. Just random things like my teacup pigs, pictures on the wall, beds, posters... It had no rhyme or reason! A wall hanging I put up just 2 days ago was locked, but a music box I put out months ago was not. It was all completely random. And the more I unlocked items and tried to move things, the worse it got! Things were just becoming locked down for no ding dang reason! It was frustrating and laughable all at the same time.

The whole family was over while I was doing this so they really kept me from shedding tears. And hey, my sis even put out a fruit plate! *laughs*

Eventually, I decided to just move the house by itself and then move each individual room. After I moved the house, everything looked NUTS. 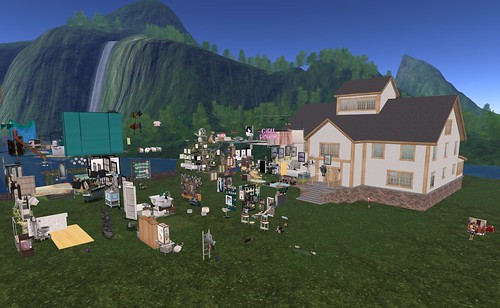 The guys, in their EVER so helpful way, said I should say that it's very zen. You know, inner peace comes from living without walls. I threatened to kick them in the face.

But I meant it with love. ♥

Everyone had to go to bed, and I stayed up, checking every prim of mine in the house to unlock what was locked. It was insane how much was locked and how random it was. I still have absolutely NO idea what happened. In fact, in my head, all I was thinking of was that cover of the Atlanta Voice from last year. "What happen? Why it happen? Can it happen again?!"

All I know is that if it happens again, we're living in tents outside.
Posted by Alicia Chenaux at 10:58 AM