So now that Abby is an official camper, the next step in her journey to camp is to make her bunk! This is where SL camp is different than RL camp. In RL camp, you go and there's a little cot waiting for you. But in SL camp, the kids all make their bunks, so they're totally personal! [Or they have the bunks made for them. People sell them, too.] The bunks have to fit within a certain size, and they only have 50 land impact to play with. Luckily with mesh, you can fit a lotttt into 50 land impact! The main part of Abby's bunk is a bed we found and she was able to mod it down to fit the size specification. I think the whole thing is only 4LI, so that's going to leave her with a lot of room to personalize it!

Of course, while we were working last night, we had to have a dance party on the platform. [Um, this was after I accidentally deleted the platform and sent us all tumbling towards the ground. Note to everyone: Lock your platforms!] 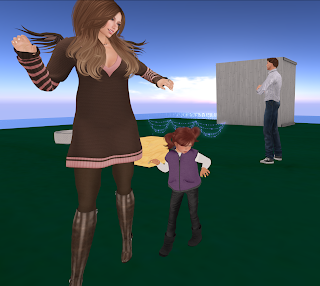 And nope, you don't get to see her bunk until it's all done!

I do wish that I knew how to do mesh, though, because she's looking for some billowy ceiling curtains and there's nothing like that out on the marketplace. If you guys have any idea where we might find some, or any cute, low land impact, fairy items, please let me know! Preferably in purples because purple is her cabin's official color.

So since I have you here, let's talk about something. Yesterday in the SL Secrets, there were a lot of butthurt camp secrets. It's expected every year. People get mad that they couldn't register for camp, they get mad because they don't get off the waiting list, they get mad because other people are having FUN and we can't have THAT. But then came a lot of "I think kid avs are creepy. They don't take care of their own families. They're weird. They're stupid. They're disgusting."

First of all - how dare you presume that because someone is a kid in SL, that means that they do NOTHING else except that. In the past few years that I've been in SL, the people I see neglecting their RL kids are the ones who spend most of their SL day looking for a boyfriend/girlfriend/one night stand. The kids I know in SL work and take care of their families before doing ANYTHING else in SL.

Being a kid in SL is no different than pretending you're a cat, or a model, or a slave, or a vampire, or a stripper, or a wife to someone you're not legally married to. You might think that YOUR SLife makes you better than someone else, but honestly? At it's base level? It's all the same. All. The. Same.

I'm not saying that there aren't kids out there that aren't like that. Our own family had a little shake up recently when we discovered someone had been running 60 alts over the past few years, hopping from family to family. There are some that give the whole community a bad name, but isn't it like that in EVERY section of SL?

But the kids I'm closest to are nothing like that. Abby has never asked anything of us. She pays her own way in whatever she wants to do. If we gift her with anything, she's extremely appreciative, no matter what it is. She doesn't baby talk. She isn't creepy. She has her reasons for being a kid in SL and I understand them. We are, outside of our SL family, actual friends. And you will find that that is the case in a lot of families. We're friends.

People are definitely entitled to their opinions. But if you'd ever like to maybe change your opinion on kids and family in SL, contact me. We'd be happy to hang out with you so you can see that it's not gross and that it's actually a ton of fun! Like I've said before, THIS is honestly the happiest I've ever been in SL. I can't wait to log in every day and talk to my family and friends. I want to learn things to help them. I want to do things to make them happy. I see people all the time talking about how their SLife isn't fun and that they're lonely, and it doesn't have to be that way. Not one bit.

One of my best friends in sl spends most of her time as a kid. She doesn't baby talk and she runs her own store lol. When I first started I thought the same thing about kid avies being scammers, creepers and all baby talkers. But that changed when I met her. Heck I even have a kid avie for myself because of her lol. Some people can just be so rude.