Yard Sale and Too Many Questions

We met up with the Oleanders tonight to chat and hang out while Lolita set up for our upcoming Arcade yard sale. I hope you guys come to shop! I've been making my list just based off of some Flickr pics I've seen, but you know once that shopping guide comes out, I'm going to give Aldwyn a heart attack. *laughs* I love the hours leading up to the event when the family is all together! This will be Birdy's first Arcade night with us so I'm excited to share it with her. 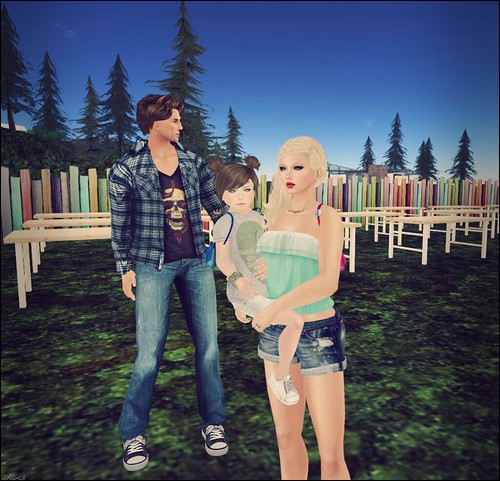 Miss Berry came up with another meme for us - 20 Questions! Y'all know I like to talk, so here we go. :)


1. When and how did you discover Second Life?

I discovered it in 2006 through a former friend. She read an article about it, tried it, and since I was a huge Sims fan, of course I was interested.

2. Did you know about virtual worlds before or was this your first experience with them?

I had been part of a text based RPG that I guess was kind of like a virtual world, except we RPed without avatars. But other than that, no.

3. Has Second Life met your expectations?

I guess I didn't really have any. I thought I'd play hard for a couple of weeks and then stop, much like I did with the Sims. Obviously, that didn't happen!

4. If you could teleport back to the first ten minutes of your avatar’s slife, what would you tell yourself?

There are real people behind the avatars! Don't hurt them and hopefully they won't hurt you!

5. How long did it take you to master avatar flying and driving vehicles inworld?

I was always pretty decent at flying. I'm still working on the driving. I'm sure I'll get it one day!

I do, actually! Well, she's not a mystery mystery, in that a couple of people know about her. But I use her to sell something silly on marketplace. I don't think I've actually logged into her in well over a year. Maybe closer to 2.

7. Is your SL avatar a reflection of you, or someone you wished you could be?

I feel like my avatar is an extension of me. I speak to people in world basically the same way I would if I met them locally. My avatar looks how I feel inside. But through my avatar, I get to have some things [like the kids and being a fashion blogger] that I can't have/do in RL, so that's pretty cool.

8. Is there an individual you met in SL that inspired you in your RL? How?

Pretty much everyone I meet in SL that I become close to inspires me in my RL in some way. But I think the one that inspired me the most was Renee. She taught me that no matter how bad I think my life is being, I can always find ways to be happy.

9. Do you feel it is easier to create stronger bonds/relationships with people you meet inworld as opposed to the real world?

I think it's probably faster to create a bond with someone online because we HAVE to talk here. If you meet someone in RL, you do things with them. Movies, dinners, running in the park, etc. Here, we chat. Even if we're out dancing at a party, we're probably chatting. You learn more about people that way.

10. Did you ever imagine or believe people could fall in love with someone they never met before Second Life?

Oh yes. I'd seen it happen. I was a "regular" in a Yahoo chatroom from 1998-200something and many of the regulars there ended up falling in love before they met in person. In fact, I brought my bestie into the chatroom and she ended up meeting a guy in there who is now her husband! :) Funny thing is, I actually met him in person before she did. I consider him my brother in law now.

11. How has your perspective of dating changed (or not) since you started playing second life?

Dating in SL, I assume? Well, hopefully I don't have to do that again. *laughs* I'm perfectly happy being Aldwyn's SL wife. If we ever divorced, I don't think I'd bother dating anyone else. Let's face it, who else would be able to handle allllll of this???

12. How has your perspective of employment changed (or not) since you started playing second life?

I think it's been good for me to see that people can make money without being tied to a desk for 8 hours a day, or stuck behind a register. Going back into an office setting when I'm able to work again fills me with such dread, I want to cry. I was great at it, but man, did I hate it.

13. Name three things in both your lives that overlap each other significantly.

Definitely the friendships. I have a few of my SL friends on my RL Facebook and Instagram, so it's fun getting to interact with them outside of SL. I can't think of much else because I don't really do much else in SL. *snickers*

14. If you could live your life more immersively in a virtual world, would you? (Kind of like the Matrix)

I think I would, actually. As long as I could still have time for my RL things, I'd love to be able to be more IN when I'm in world. I've had brief glimpses of it, like when we're "having a meal" with the family or something like that, and it's super fun!

15. How do you think behavior changes for people if they’re inworld vs in real world? Why do you think that is?

I think because people are mostly anonymous, they let the more negative side of their personality out. I see a TON of "I can't be bothered, I hate people, everyone sucks, I can't stand this/that/the other thing and if you like it, you're stupid" from folks and I know they can't possibly be THAT dang unpleasant in their RL day to day activities because they'd be punched in the face a lot. But I think it's mostly for attention, too. If someone is all negative and venty, people will join in because it's easy. Being negative is easy, being happy takes some work.

16. How has second life consumerism changed your perception of spending habits, the value of money, the need to be “bleeding edge” with fashion?

Over the past few years, I've moved away from having to have the best of the best of the newest. I still have new things. I still have awesome things. But I'm not like other bloggers and I'm okay with that. I shop when I like something. I try not to think about how much I've spent. *laughs*

17. Do you think virtual worlds like SL drive and redefine human interaction or do they narrow and limit it?

I think the internet as a whole has redefined human interaction. Would I have friends in Germany, England, Scotland, New Zealand, without the internet? Nope. Second Life is a upgrade from chatrooms, which were an upgrade from bulletin boards, which ... etc. I've expanded my horizons. I think we'll continue to do that.

18. If technology progressed tomorrow to allow you to send emotions to people the way you’d send text or voice messages, would it enrich your SL experience or infringe on it?

I don't think I quite get this question. I think people who are close to me know what I'm feeling at any given time. If I really don't want them to know, I hide it, but that's pretty rare with the people I'm closest to. My SL/RL lines are blurred like crazy.

19. Name three skills you attribute to having learned or honed in second life alone.

Photoshop, home decorating, and... how to let go when I need to.

20. If your grand kids googled your Second Life Avatar’s name, would they be intrigued, disgusted, proud or something else?

I'll never have grandkids, but even if I did, by that time, they'll probably be running around in Fourth Life.

to # 15
yes ive seen this alot too an its kidna annoying to see how fake people try to act in sl. Just recently one of my sl freinds was bugging me that wed meet in rl finally i got annoyed an told him i dindt think we would meet in rl. I was just being realistic an his personality totally changed from a sweet guy to a big D-bag. he eneded up defriending me on sl an skype. wish i had known this side of him sooner ...lol

Your answer for #17 is really interesting and totally nailed what Second Life really is, just an upgraded chatroom/Bulletin Board. I wonder what 4th life is gonna be like!