After Abby asked us about the possibility of adopting another kid, she and I headed to Heritage just to check out some of the cards. We were both very surprised when we both found a girl that seemed pretty cool. She wrote without baby talk, she was the right age, her time zone and times she can be in world mesh well with ours, and she's more of a "girly tomboy" like Abby. So I went ahead and made us a card and put up a panel so we could "like" her panel. I kind of didn't expect anything to come of it. After all, we're kind of picky and I put everything we expect and want in our notecard. I had to give it to Abby to look over before setting up the panel because I wanted to know if I made us sound like jerks in the card. *laughs*

Surprisingly, last night Brianna, the girl that we liked, liked us too!! Abby had been up at Heritage hanging out and they had actually been chatting before Brianna liked our panel. So she brought her home. :) Abby wasn't able to stay up too long, so I got to sit and chat with Brianna for a while, and then Lolita and Takeo came over and got to meet her. She's kind of shy, but I think that is good. If she came in all loud and getting too familiar too fast, I think I'd be like "K...maybe not." LOL! But she's sweet and by the end of the night, we decided that we wanted to go ahead with the trial period.

Tonight she kind of got a "trial by fire" with the whole family [minus Aldywn, who had an unexpected obligation pop up] with our family Easter party! The kids got dinner [where we learned that like Riley, Bri also doesn't eat anything with a face] and then they got Easter baskets! Lolita, Takeo, and I dressed as little bunnies and danced for the kids while they ate, so it was dinner and a show! The egg hunt was loads of fun because it was a nighttime hunt and they had to run around with their flashlights to find their eggs. 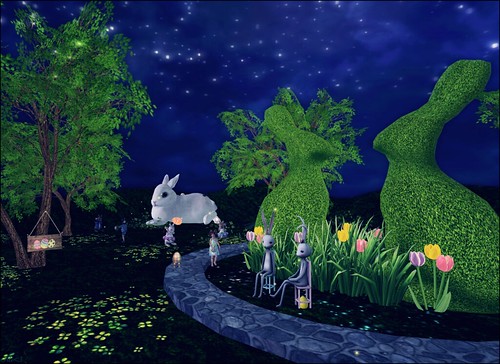 It was so much fun!! Of course, my sister and I knew where the eggs were because we had hidden them, but the kids had a blast running around and finding eggs. Payton is super good at egg hunting and found them in no time flat! It was so so cute to watch them running around.

After the hunt, we all posed together to take a family picture. I'm the bunny in pink and Abby and Brianna are behind me. Takeo is holding Riley and Payton, and Lolita and Raven are on the end. 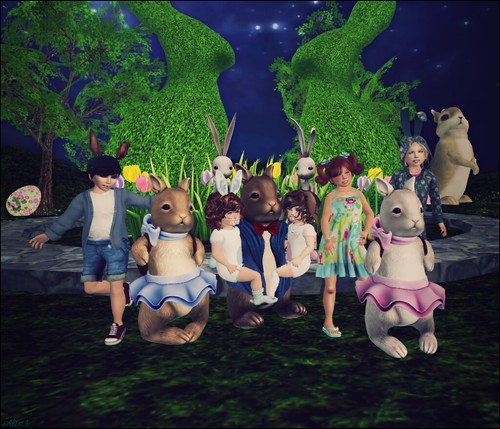 Once the pictures were done, we went to Easter Town and there was Peeps racing, egg floating, and another egg hunt! We had so much fun! I'm not sure why some people would choose to go there dressed in skanky clothes with dirty AOs, or feel the need to be cursing like maniacs on voice, in a place that is obviously designed to be more family friendly in nature, but well... I guess it is what it is. :)

All in all, it was a terrific night. Brianna seemed to keep up with us well, and everyone likes her. The next big step is for her to meet Aldwyn so I can see how they get along. I think he'll like her, and people can't help but like Aldwyn, so there shouldn't be any problems. After that, then I guess we'll start looking for a bigger house so the girls can have their own bedrooms. They're sharing right now but if everything goes well and Brianna officially becomes part of our family, I'll want them both to have their own spaces and our current house only has two bedrooms.