Most people who know me know that I'm a huge band nerd. For many years, marching band was my passion. I had actually planned on making it my career. But, life doesn't always go the way you want and things change, so now I'm just a marching band aficionado. Earlier today I hit up some gacha yardsales and then finally made my way into The Arcade where I saw the instruments from Balaclava. I got a couple, just for fun, but I didn't realize how happy they were going to make me!! I truly want the entire collection!!!! 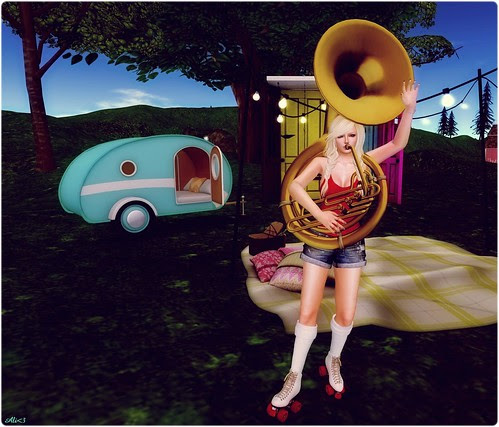 I had just the worst gacha luck today! Well, I should say I had bad inventory luck, actually. I hit up some really decent yard sales but being that they were decent, they were CROWDED. So I crashed a lot. And in my crashing, I lost items that I'd just bought. SADFACE. I was especially sad when I lost my skates and TWO trailers today, including the Audrey one that I was actually going for! Well, the Audrey and the Turquoise are the ones I really want, but while at the Arcade I did manage to get the Audrey and the crashed and SL ate it!!! Luckily, I have really decent friends who took pity on me and gave me the color skates I bought and lost, and also an Audrey trailer. There are a few other things I bought and lost, but there's really nothing I can do about that except try to find them again at yard sales.

Now, I like the yard sales a lot. I really do. I think that if you WANT something and don't have the money to keep plugging into a machine to get the color or item you want, and someone else has an extra, it's really a great system. What I DON'T like is when someone thinks because an item is a rare, they're allowed to mark it up to high heaven. I saw a $50L charm earlier for $600L. C'mon now. The point of playing gacha is really not to break even or profit off of someone else's work, you know? We're not playing Kittycats or Meeroos. I know some creators have been kind of put off over folks marking their stuff up to over $1000L, and some others who don't care, but I think the practice of doing it is super super tacky.

I don't really remember huge yard sales popping up when Albero used to have the gacha festivals, do you? People just traded for what they wanted, or just freely gave duplicates to their friends as gifts. Now I WAS spoiled yesterday with duplicates, which was really nice and I'm really grateful to my dear friend, but it doesn't seem quite as common any more and I don't know why that is. It would be wrong to say that the quality of the items is just a lot better because some of the same people participated in the Albero festivals. And I know that mesh does seem to make everything a little better, too, but I can't say that's a huge factor either. I just really don't know what it is.