Day 136 - This Movie Made Me Want Watermelon

Movie night with the Oleanders tonight! Brownie points if you can guess the movie. :) 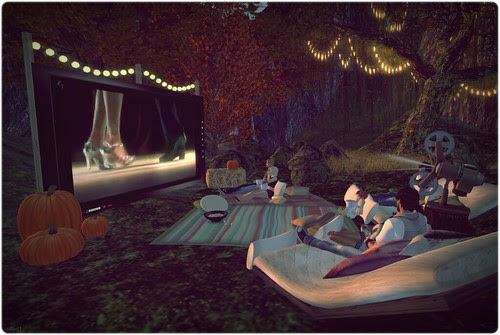 I couldn't wait any longer, so our autumn grass came a day early to Bluebonnet. As much as I think beaches are nice, I just wasn't feeling the whole summer beachy vibe this year. Even doing a "Martha's Vineyard" style beach this year wasn't what I wanted really. I'm so much happier with the grass, especially the darker grasses we use for the autumn. Once our new house is prepared, I can really get to work on the parcel and see how well my ideas work with my skill level.

Maybe one of you will know the answer to this, as I'm still pretty uneducated about the whole pathfinding thingy in Second Life. I've chosen to turn it off for now on the island, simply because I don't really know WHAT it does and because I don't really think that we need it. But whenever I terraform, it starts to tell me that I need to rebake the region. What exactly is rebaking doing? And why do I need to do it when I terraform? It's not the same thing as saving the terrain file, I know that much. I wish someone would just put out a very easy to understand page on the whole pathfinding thing.

So I started tonight getting the parcel semi-prepared for the upcoming destruction and rebuilding. But then the house caught on fire. 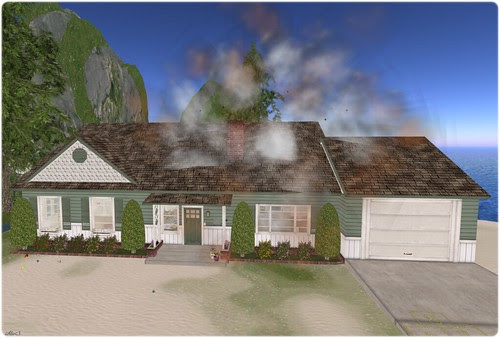 On the bright side, Ulaa is restructuring a house for us. So there's that.

Posted by Alicia Chenaux at 11:59 PM No comments:

Yesterday I read the novel The Second Life of Isadora Tooley after seeing it on New World Notes. Review it? Why, don't mind if I do. 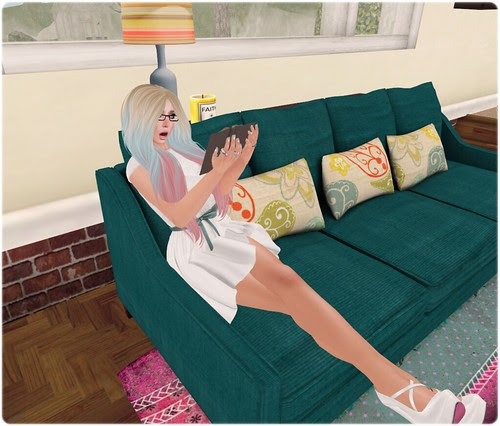 This book is called a "romantic thriller." Meh. I guess? There is some sex in it, there is violence, there is a creepy man who wants both sex AND violence. So if that's what makes it a romantic thriller, then okay. And yes, Second Life is featured greatly in the story.

[This is going to get long, I think, because I write too much, so there's more after the break!]


Read more »
Posted by Alicia Chenaux at 3:55 PM No comments:

Another Wednesday dance party with DJ Lolita tonight! It's always fun! I especially like when Aldwyn is able to log in before it's over so we can hang out together with everyone. 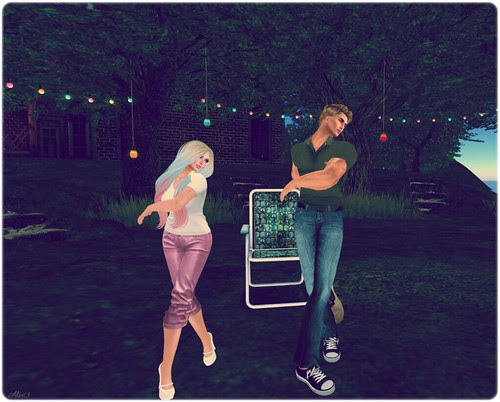 We only have a couple more days of our "kinda summery beachy" terrain on Bluebonnet. I have big plans for our parcel but honestly, I don't know if I can pull off the look I want without it going all to hell! I'm not exactly the best landscaper or anything. In my head, I know what I want but having the SKILLS to do it? That's SUCH a different thing! :-p I guess we'll see. If it looks like a huge hot mess, I'll just throw trees everywhere and call it a day.

Posted by Alicia Chenaux at 10:52 PM No comments:

Yay! After what seems like a very long weekend away, Aldwyn has come home to me! I don't know why this weekend was more tough for me to have him be away. It's not like we haven't been away from each other before. I guess sometimes you're just a lot more needy than other times. 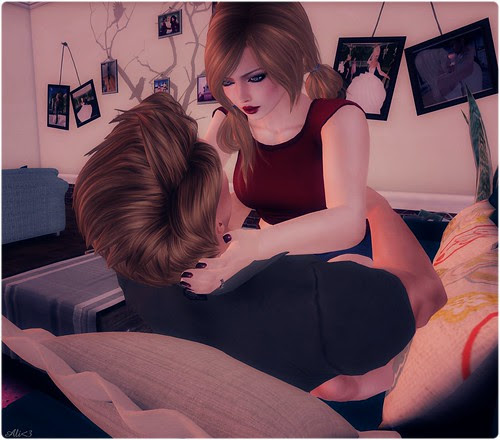 Besides... without him here, I had no one to sit on! I actually had to sit on chairs. My preferred spot to sit is on him. Always!


Posted by Alicia Chenaux at 10:31 PM No comments:

I love playing with windlight settings. I really do. I usually mess them all up but luckily people share them and I can just download them and not have to worry about it. I don't remember where I got the lighting in this photo but it's so pretty. And the mirror water, I think I found over at Berry's blog. 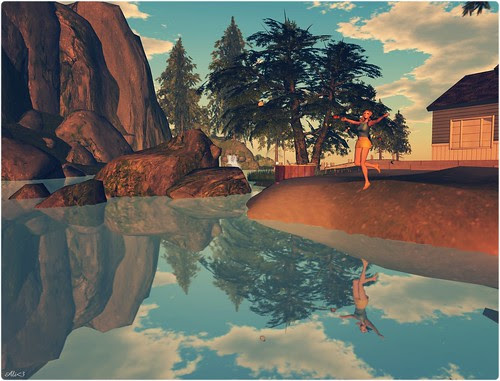 I think people get a little crazy with shadows when taking pics sometimes. My computer CAN run shadows, but there are certain things that happen when I turn shadows on that I don't care for, like my mesh lashes clumping up like I don't know how to apply mascara, and the fact that I can't take the picture larger than window size without damn lines showing up all over the place. HATE THAT SO MUCH.

So I fake "shadows" from time to time, mostly if I'm indoors, by just messing with the lighting. I guess I'd rather have a clean picture with fake shadows than a clumpy lashed, broken necklaced, looking like a hot mess picture with shadows.

I guess I should get in bed. I have to get up early to get beat by my trainer, and my Aldwyn comes home to me in the evening. :)

Posted by Alicia Chenaux at 9:56 PM No comments:

I was preparing for another quiet evening in SL. I thought maybe I'd do some inventory cleaning...or some shopping to clutter up my inventory more. But Lolita mentioned that they were going to go play Pacman Munchman, so to heck with inventory cleaning!! I put some clothes on [I wasn't NAKED. I was just in my trampy dress from yesterday and I knew this would be a family friendly event] and went on over. 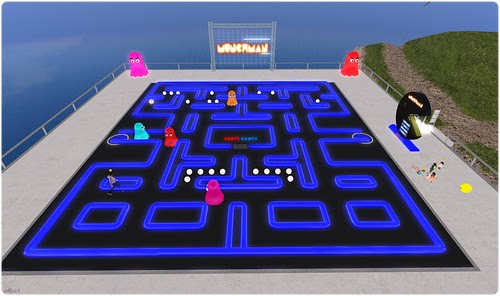 It was really fun!! You wear a HUD and when it's your turn, you just run run run through the game "eating" pellets and avoiding ghosts! I was surprised that I was actually good at this, but I always have been amazing at walking in SL. It's one of my few skills! :-p

It's been a pretty good weekend, even without my husband, but I sure can't wait to see him again!! ♥
Posted by Alicia Chenaux at 11:03 PM 2 comments:

Quiet night for me tonight. I should take advantage of the alone time and grab some girl friends and go do stuff, or finish decorating the house, or clean my inventory, but all I did tonight was sit in a tube and watch the sky. 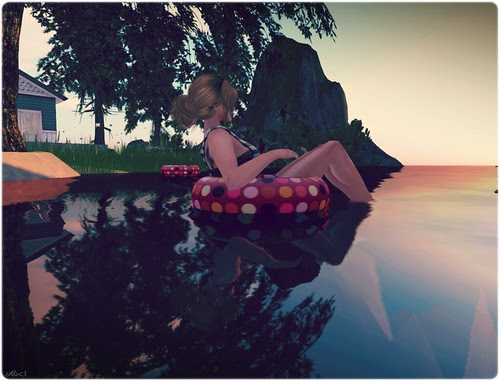 But then again, there are worse things I could be doing. :)

Posted by Alicia Chenaux at 10:14 PM No comments:

I watched "Selena" tonight while Aldwyn was doing some research online. This is, kinda shamefully, one of my favorite movies. Al has never seen it, which caused me to gasp when he told me. It's not divorce worthy, but...it's kinda close. :-p 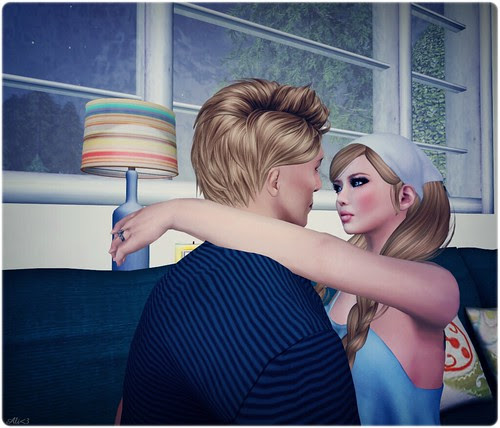 Posted by Alicia Chenaux at 11:40 PM No comments:

I always enjoy getting together with friends in SL when it's not a just a party setting. I don't really just "hang out" with others very often. Probably because I'm kind of a bad conversationalist. At least, I'm a bad conversationalist with people that I am not around much. If you asked Aldwyn, he'd probably tell you that I chatter on about absolutely nothing most of the time. :-p

But, tonight I did go and hang out for a while at the Oleanders' place. We played Connect Four! It was super fun, even if I'm pretty spectacularly bad at it. 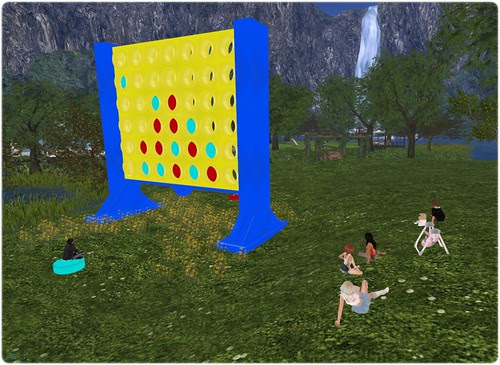 After the game was over, and after I told Lolita and Takeo that I was just going to wander over to their house and look in their fridge from now on, I headed on home. And much to my surprise, everyone came home when I did! 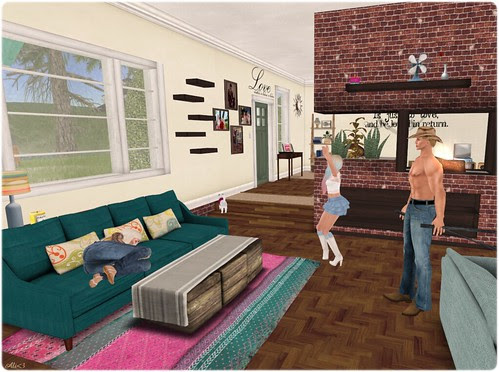 The living room still isn't completely done, so don't look at it too hard.

Ulaa had to leave us to go do other stuff, so Aldwyn and I headed to Maitreya because there's new stuff there. I hadn't planned on buying the new dress, but the darn demo got me and we decided I needed it. And boots. Because, you know... new. :-p I probably won't blog the look just because everyone and their mom will do it, but it is super cute.

Of course, the best part of the day is ending it safe and sound in his arms. :) 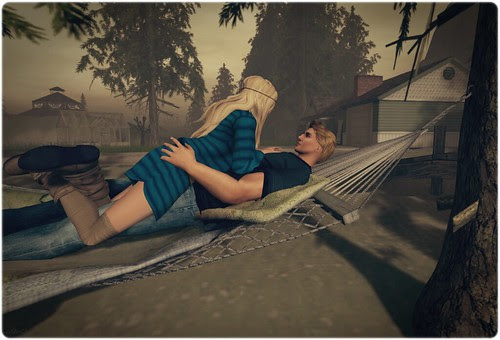 You know, it's really hard to find a skin for a blonde man in SL. I never realized how hard until last night when Aldwyn and I were out shopping for one. I guess that's why most men in SL are "tall, dark, and handsome." It's certainly not all that easy to find a skin for a "slim, blonde, and good looking" man. We did eventually find one that would work with lighter hair and I really like it, but it's still kinda tan. Although, I will say, Aldwyn has become significantly LESS tan in the time we've been together. I guess my pale skin is rubbing off on him.

Do you guys have ideas of where a blonde man could go to get a nice skin? We don't want like, vampire pale. Just...like my color pale.

But I will say this much. Every time he gets a new skin or a new hair color, it's like being with a brand new husband because in general, he doesn't change skin or hair that much because he's pickypants. Of course, we all know he's picky. After all, he waited for me, right? :) 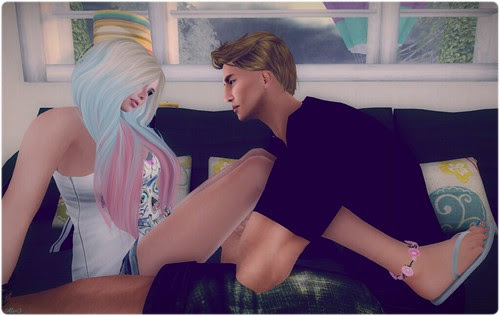 Posted by Alicia Chenaux at 8:34 AM 2 comments:

Aldwyn and I have been together for a little over 2 years. I know, it's like 10 years in SL-time, isn't it? But there are some nights where I wonder if he ever gets tired of me. Because as lovely and romantic as this photo looks... 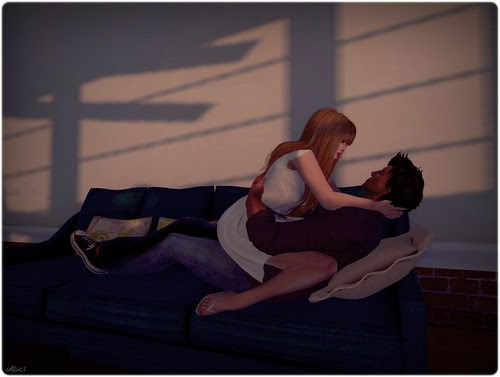 Me: It's more humid there than here. But it's going to rain. Then it will be very humid.

Aldwyn: Yes, yes it will.

Me: Because see, when it rains? It's wet. Because of the rain. Which is wet.

Aldwyn: It sure is. [He was most likely facepalming at this point.]


I swear the day he goes "for a walk" and doesn't come back, no one is going to blame him!

Tonight I DJed for December & Abby's 1 year adoptiversary! It was a fairytale theme, so I slightly resurrected my look from the royal party last week, changing my dress and skin. I adore this gown, but I think I've only worn it once when I modeled for Evie's bridal ad. 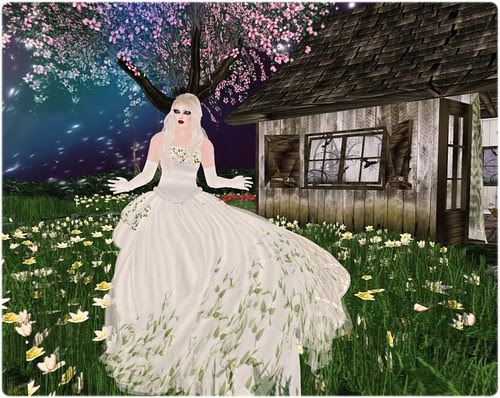 December made a fairytale dome and oh, it was just so so pretty! I wanted to move in!! It was just so magical! See? Pretty!! 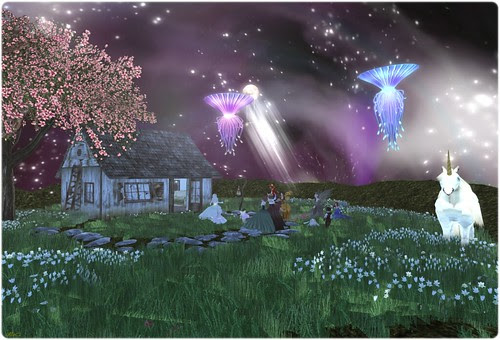 I made the mistake of downloading a new viewer about 20 minutes before the party started, so I didn't have a chance to really get all my settings fixed up beforehand. I've been using Firestorm the past few weeks but it's been running pretty slowly in the past week or so. I mean, let's face it. It's a fairly bloated program. So I went back to the LL beta. It's super fast and light on my machine. Once I get all the settings back, I'll be golden.

But, it did mean that I spent half the party with December's hair not rezzed. Eventually it did, though, so I was able to catch a pic of her and Abby! 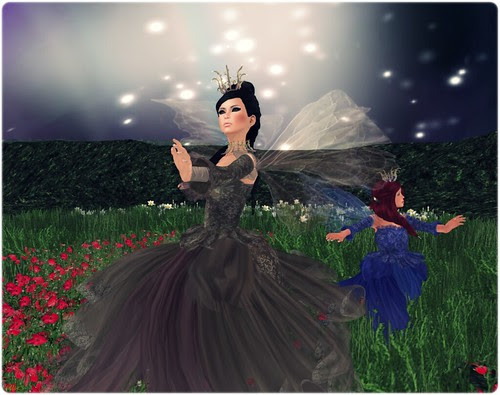 It was a really fun party, and I enjoy DJing for the family parties lately. It's kind of funny because for the longest time, I had never been around child avatars for longer than a minute or two and I thought the family thing was really weird. But as I meet more decent SL families, I realize how great it is to have a SLife full of family and love. I know they have their dramas and their madness, same as any other group in SL, but I really do enjoy being around the families lately. It's nice to feel like a part of that even if it's just for a couple of hours at a party.

Posted by Alicia Chenaux at 11:54 PM No comments: