Earlier today I put out a swingset from What Next. When Aldwyn logged in tonight, that's where he found me. 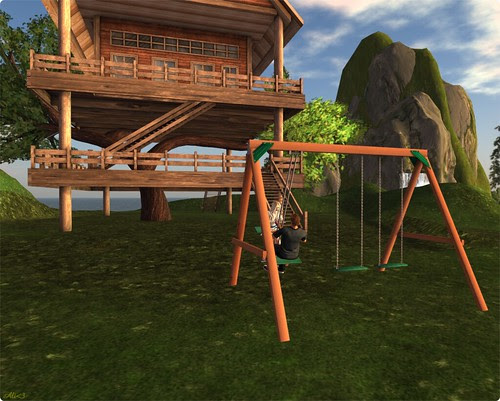 Is it considered swinging if you're on the glider thing? I would assume so.

Anyway, I should be getting in bed or finishing up a pic for the style blog, but I don't wanna, so I will do Berry's Procrastination Meme instead. :-D And hopefully I won't get as long winded as with the last meme.


1. What is the rez date for your current SL Avatar that you use most often?


2. Where was the first place you made friends as a newb and got to know people in Second Life?

Under this av, I would have to say ... some infohub that I've now forgotten the name. I think it was near The Shelter? I sat around there for a bit and eventually a couple of guys started talking to me, and one of them was super nice and took me exploring. He's still on my friends list, as a matter of fact, although I have not seen him log on in years, and I haven't talked to him since probably early January 2008.


3. Where do you spend most of your SL time now?

Mostly Bluebonnet these days. I don't really like clubs or most beaches, no one really invites me anywhere [and, let's face it, I've forgotten how to hang out with most people], and I can't shop ALL of the time. We have a pretty awesome home and there's always something to do here. I feel safe on the island.


4. Who is your closest friend in Second Life? (only pick one)

I CAN'T PICK JUST ONE, STRAWBERRY. Aldwyn and Ulaa tie for the title of my closest friend.


5. What is your favorite thing in your inventory? (only pick one)

God, Berry. What's with the hard questions?! :-p If I HAVE to pick just one thing... Probably my rose from Light Waves. I bought it at the Black Swan before it closed when I was going through kind of a crappy time in my SLife. It just reminds me that beautiful roses grow out of dirt and manure.


6. The last thing you purchased in Second Life?

The Hangover tank from Drift. I had to go back into my transaction history to look and realized I haven't shopped since the 18th. But yet my inventory has grown. What the eff.


7. What color clothing does your avatar wear most often?

Probably aqua, with white and pink coming in neck and neck. I'm a sucker for girly pastels.

I like to run! The funniest thing in the world to me, and I usually only do it when I'm alone on the island, is to turn my AO off and just RUN. It's hysterical!!!!


9. What is the craziest thing you’ve ever done in SL?


10. Who would you like to play YOU, in the movie of your SLife?

Umm....probably Elizabeth Olsen. What? She's kinda pretty in a weird way, which is how I feel about my avatar most of the time.