Tonight we went walking around Bluebonnet looking at peoples' stuff because sometimes I'm terribly nosy and I actually don't get to the other side of the island very often. But I was lagging badly [my computer's fault, not SL's fault], so then we just sat down. 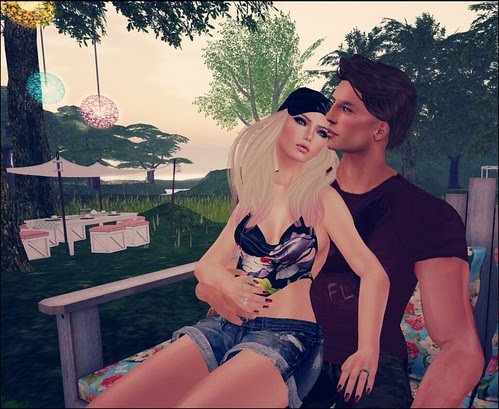 I was trying to get a really nice photo of us because I have all these picture frames and stuff but not a lot of pictures to put in them. But well, this pose wasn't very well adjusted for us since we have never used this bench before, so I had to try to fix some stuff in Photoshop and you know how that goes. LOL We have to adjust almost every pose we have because I'm a lot smaller than Aldwyn. I really think some posemaker in SL should make some couples poses for short girls and tall men. Certainly we can't be the only couple with this problem!

Ugh, I'm sleepy and I just remembered I have to put all my freshly washed pillowcases on my 11 pillows. Sometimes it's easier to sleep on the couch!

11 pillowcases, you say? Perfect opportunity to master this technique, then:

love that top your wearing! will you be posting it on your fashion blog??

Wrath - I could have used that tip last night!! Although after having so many pillows for so long, I'm pretty quick at getting them all covered!

Korrah - Um...no, probably not any time soon. LOL I'm not even sure when I got it, actually. It's the Satin Halter from OneBadPixel if you want to buy it, though. :)