It's always kind of weird to me why people go to very obviously family friendly areas and then act like having kids there is some kind of craziness.

Last night we took our Bumblebees to a school place that had horses to ride and kites to fly. A couple of losers were there who just acted like it was some personal offense to them that kids would be in the area. We were on voice, of course, so they started just saying horrible things. I muted pretty quickly, and we told the kids to mute, too, but it was still uncomfortable.

The kids are pretty awesome, though. They took it in stride, some thought it was funny, and the others just have been through something like that before so they just did their ARs and then went to fly kites. The Gilmans came to distract the losers while we got the kids up the hill and then the losers were banned from the sim.

I know some people would probably say, "But it's not like they're not adults behind the avatars!" Duh. We're not stupid. :) But to us, they are kids. Especially when we are actively RPing, like for scouts. We try to make SL a safe place for them to play because it's fun for us, too. Some people just don't understand why you'd come to SL and not be overly sexy, or combative, or just a huge troll. Attempting to just have innocent fun is above their heads, and that's sad.

But one place that is totally safe is our home. :) And speaking of home, I have a couple of parcels open if you'd like to make Bluebonnet your home! One parcel is large, 12512sqm/2863 prims. I can split it if necessary, but would give first preference to someone who wants the whole thing. The second parcel is smaller corner piece, 2944sqm/673 prims. You get to do your own terraforming and landscaping, and the sim is quiet, usually mostly empty [except for an hour on Thursday nights, or the occasional party] and of course it is family friendly. This is residential land, but if you have something you want to do like your own photo studio/gallery or a garden, talk to me about it and we'll see if we can make it work. :) IM me in world if you're interested in prices and/or seeing the parcels!

And really? Who wouldn't want to live near us? We're adorable! 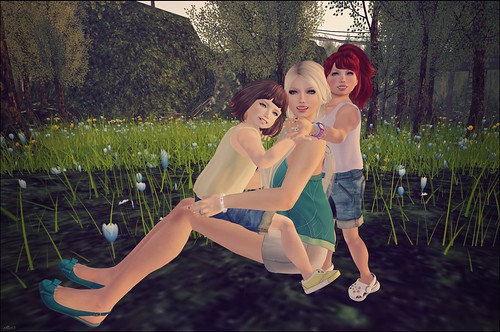 aww cute pic! and yes your right it is sad that people cant wrap there heads around the idea there there other stuff in sl to do besides trolling .....