Quick blogpost today because I have RL stuff to get to, although I'd almost rather just go back to sleep. :) I stayed up later than I should have last night because we switched to a bigger house and I have this thing about empty rooms. Especially empty rooms where people will be. If a bedroom is empty or something, at least we can close the door. But the downstairs of our new home needed stuff. 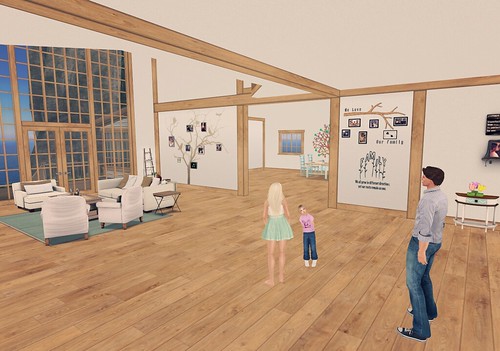 Today is the last day of our Heritage trial with Brianna. But we're not the type to just go into an adoption quickly, so last night I asked if she would be interested in extending her trial with us. We feel that a week long trial is often not enough time, especially when they happen over a holiday weekend. We were all busy with this and that and while we do like Bri a lot, we want to get to know her better. [And we didn't want what happened to Lolita & Takeo back in December to happen to us!] But of course I told her that if she wasn't into long trials or if she didn't feel like we were the family for her, to just let me know. We wouldn't want her to feel obligated to stick around if she didn't feel like Aldwyn and I could be her parents. We would all definitely still be her friend. The longer trial period is for her benefit as well as ours. Maybe even more for her benefit than ours in the big picture.

You guys might remember that we had Abby living with us for months before we officially adopted her. We were pretty sure how we felt about her very early on but waited until she was ready again to be adopted. Of course, the circumstances are a bit different in that Abby came to us directly from a family, and Bri has been on her own, but still. I want her to be sure and I want us to be sure.

Of course, being that this has obviously been on my mind for the past week, it has me thinking a lot about family. When do you feel like family with someone? To me it's not something that can be forced, although I have seen it forced in SL families a lot. The too early "I love yous" and the over familiarity and the quest to be the number one kid in someones' life. But then again, should you slow your roll when you honestly feel something even if it's early on in the game?

first off love that house!

Second for me i have to get the feeling like i would in my own RL home."safe" an then the other moment an feeling when you start talking to the person an you can connect with them sort of on a understanding "ah ha moment" an that you agree with what ever subject your talking about 100% thats when i know its truly the right fit.But what can i say ive had 30 sl family fails over the years an now that im still a teen but on my own ...well there's not that "forced" feeling you get with trials....