I took this photo last night but before I was able to post, my internet died. So it's not my fault that it was late!!

We're still in the process of fixing up our winter getaway. Ulaa has created an adorable little cabin for the winter, and so we moved to that one instead of the bigger house we had up there before. But in the middle of decorating, which I really didn't feel like doing for once, we got a little silly. 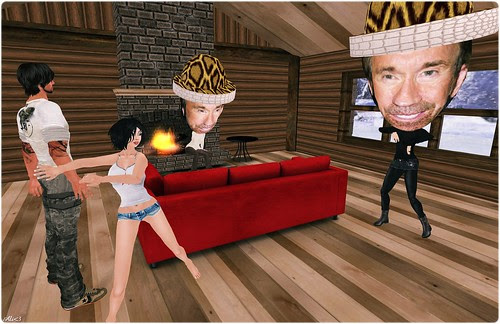 My very little used alt, LaChola Mexicola, was dancing for Señor Al. Ay Papiiiiii. LOL! I updated her shape and changed her clothes after this was taken. She'll sit quietly now until probably next year, or until I choose to take her out to play with her again. Pobre LaChola, que siempre será fea.