Day 364 - In the depth of winter, I finally learned that within me there lay an invincible summer. 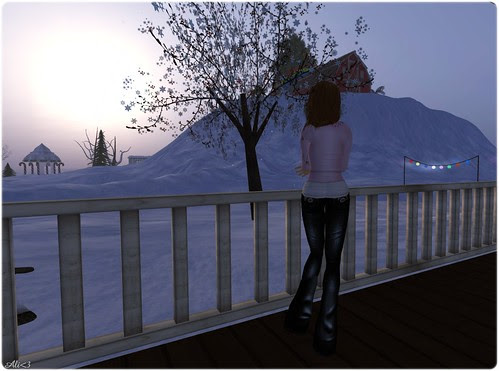 The Bluebonnet residents are pretty awesome. When some of them moved here, we were just a beach sim. That's all. Just beach. When I had gotten the island back in 2008, it was a beach sim and I kept it as such for a long time because...well, different reasons. But as the island became more mine, I started to get really sick of the sand. It was just too dry, too desert like for me. So I asked the residents if they would like to have grass for a bit. I kind of expected opposition. After all, they had all spent money to decorate for a beach sim. Their landscaping, their houses, everything was designed for the beach and would not look right in the middle of a green grassy sim.

To my surprise, they were all excited. New houses to buy! New trees and flowers and other things! I should have known, given how many bloggers lived on the sim at the time, that they would turn it into a huge shopping experience. LOL

So now we change for the seasons. Bright green grass in the spring, beach in the summer, darker grass for the autumn, and snow for the winter. I think everyone likes it. I haven't heard any grumbling about it and people seem happy to change with the seasons, so I guess that's how we'll keep doing it. :)

"When you live in Texas, every single time you see snow, it’s magical."
~Pamela Ribon