I hate being sick. Like, truly hate it. I do everything in my power to avoid catching any kind of illness. But sometimes it's unavoidable and I've spent the past few days playing caretaker until I came down with something, too. Grrrrrr! Luckily all my preventative measures have helped in making my illness not that bad, but still - Grrrr!!!

But I felt well enough tonight to come on because I missed my family! Plus we had to go to my sister's goddaughter's surprise birthday party! It was fun and Lolita had a great playlist, but we couldn't stay too long because it was camp registration tonight!

If you're not familiar with Camp Hardknock, it's basically a week long RP thing for the kids in SL. Some adults also go as counselors and other camp staff. I REALLY wanted to sign up as a counselor this year, but my computer is not up for the task and I didn't want to be the counselor that was frozen or crashing all of the time. But it's a great time for people. The kids get to meet new friends, reconnect with old ones, play games, tell stories, get homesick, not want to leave, etc. There's a parents day so parents can come visit. They really try to make it very camp like! I've always LOVED seeing all the camp plurks! This is my first year as being a camper's mom, though! Abby was able to register!! Oh, did I neglect to mention the Hunger Games that goes on to GET to camp? *laughs* Okay, it's not THAT bad...

Because only 100 campers are allowed [I think it's just 100], the race to get registered is FIERCE, y'all. I promise you, there has never been a sale in SL that is like the fight for camp registration. They throw on their plain skins, strip off the AOs, and fight to get in to register! 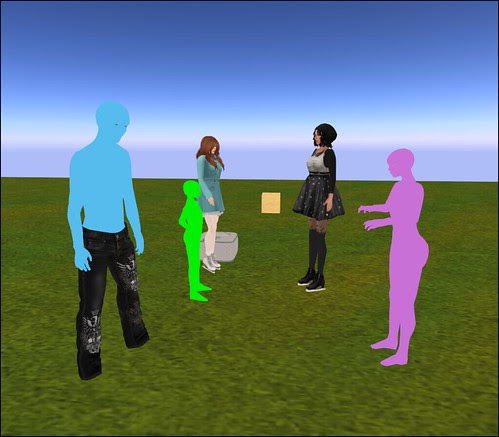 Abby managed to get herself in this morning [my poor little girl, having to do it alone because I was sick!], so we were preparing to fight for Raven to get in. Luckily, someone else can register FOR you if they get in and you do not, because they were having nooooo luck getting there! I didn't even try because I knew I'd crash immediately. But Raven has a nice friend and so he got in! And I'm very thrilled because with Raven going, and Lolita and Takeo being counselors, my Abby won't be without family at camp. I know she's a bit nervous because this is her first camp in a while, but I also know that once she gets there, she's going to have so so much fun and not want to come home!

But she will come home, if I have to go there and drag her home by her ear.

However...as much as I'm thrilled that she got in, and Raven got in, and Lolita and Takeo will be there... what the heck am I gonna do for a week?? I guess Aldwyn will have to go back to entertaining me. *laughs* Or...well. I'm sure there's SOMEthing I can do while they're all gone.

Now the next thing is for Abby to get her camp letter, which of course I'll take pics of when she gets it! Then we have to work on her bunk [they all decorate their own bunks with personal things, pictures and whatnot] and make sure she has everything she needs for camp. Fun times!

Oh, btw, if you're interested in seeing a bit of camp, this is a video of winter camp from last year. Looks like a good time, huh? :)