New house! New house! We went out tonight and picked up our new house! I'm more than a little overly excited about this. :) But looooook. It's so pretty! 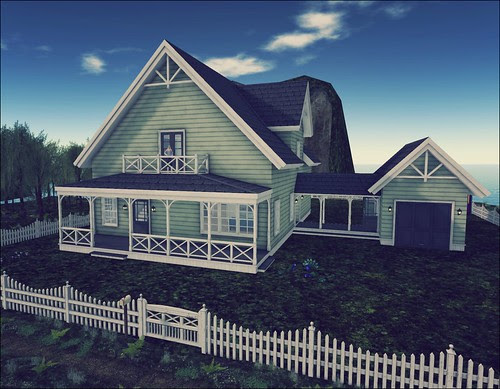 It's from Roost and it's the first time I've had a house where I asked other people first before using it. Honestly! Aldwyn and I have lived in probably a dozen different houses in the almost 2 and a half years we've been married and not once have I asked him what he thought before picking up the old house and plopping a new one down. He's never seemed to mind, though, and would probably be just as happy with me if we just lived on a platform. And while we had a different house when we met Abby, she's only ever lived with us in the old house. So while that house had many good memories, I'm still me, and oh man, was I ready for a change.

While this house is spacious, it's not as OPEN as some of our previous homes have been, and I like that a lot because it means I can clutter it up in the way that I like and make it cozy for us.

We worked a bit around the pond area today, too. Abby asked me if we could make the pond more enchanted, and of course I said yes! She went and bought herself a tree house [well, it's more of a look out since it doesn't actually go in a tree] and she wants to put it near the pond so we need to find just the right spot for that. But we have some butterflies and fairy lights out there now, and I'm going to add some more flowers and other things. My little nature girl loves to be outside so I want to make it as awesome as I can for her!

But I'm exhausted now, and freezing cold, so it's time to crawl into bed and sleep!