A few days ago, I read a NWN story on the game Kagami. NWN calls it a Japanese horror game, so while I was intrigued, no WAY was I going alone. No. WAY. I am probably one of the biggest 'fraidy cats in the world. So I mentioned it to the family to see if they wanted to go, and of course they did since we love exploring new areas.

We had 2 thoughts about it going in. 1 - That it would be super scary. And 2 - it would be very anime in nature. Since that's what we thought, some of us dressed up for the outing. 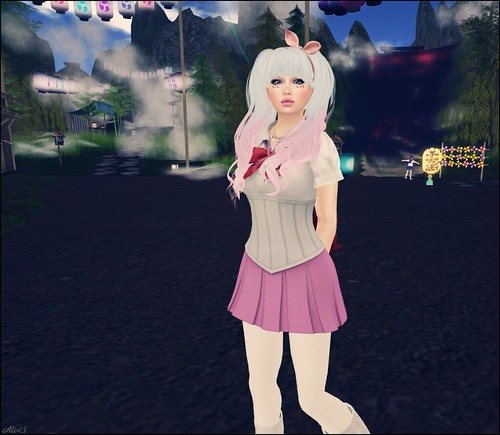 The anticipation of being scared made us scream a lot. The story was pretty decent, with cutaway scenes and being moved around with the HUD. But... it wasn't really scary. It also wasn't very anime either, but I still enjoyed my costume. It took us about 3 hours to complete the 2 parts of the game, and there were a lot of frustrated groans because we didn't always understand the next step to take, but it was a nice thing to do with the family.

Also, my great-niece Sophie found her new dad. Now to get Bella to agree to marry him. *snickers* 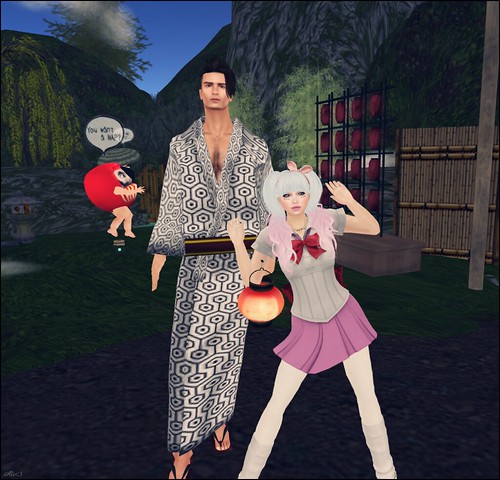 He kept standing around me, so I had to take a picture. I'm not that super small. He was just really big.

All in all, I'd say if you don't have much else to do with your SLife, head on out to Kagami to play. Be sure you keep your scripts low or you can't get the HUD! It's only open until August 31st, so less than a couple of weeks left to play.
Posted by Alicia Chenaux at 12:54 AM

I appreciate your idea here. Definitely it has a good content. Thank you iessaywriter.com for imparting more of your own thoughts. Good job!