So the family is going to be going on vacation again! You might remember that we went to the Bahamas back in March and had an AMAZING time! It was our first big event as a family, since Abby had just been adopted 3 months before, and Payton and Riley had only been Oleanders for less than a month. It was a great bonding experience for us! Now we get to do it again, and we have more kids this time around!

We'll be heading to a resort at the Grand Canyon soon! Originally, we were supposed to fly out on the 18th [I think], but a few nights ago, my sister said "We're too excited! It could be ANY TIME, so be ready!"

But since I had some time this afternoon, I decided I should start packing us up so that in case Lolita yells "It's time!" we're totally ready for it. 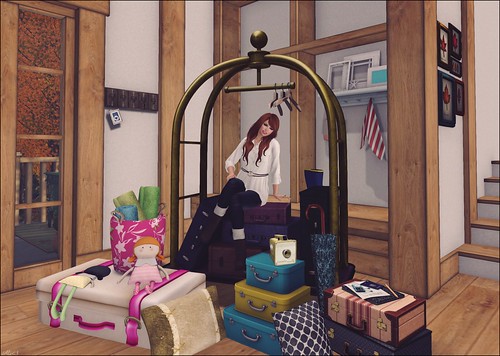 I did NOT, however, pack Aldwyn's Bob Marley shorts.

This vacation couldn't be coming at a better time for me. I've been feeling... well, not sad, but just kind of down. And not as connected as usual. I know it's just this time of the year. It's not unusual. But I don't like it. I feel like I'm letting a lot of people down by not being as involved as I usually am. But it's not just in SL that it's happening. It's RL, too. It sucks but it's also not forever.

Our vacation will do me good, though. Get me back to being a better mom in SL and stuff. :)

But seriously, if the Bob Marley shorts come out, someone's gonna be thrown into the canyon. I'm just sayin'.

Youre an amazing mom! I love you!