I was out and about trying to find a place for a blog pic for My Second Closet earlier. I had taken pics in about 5 locations before settling on the one that actually made the post, but this one was one that I loved. So, it gets to be my picture of the day. 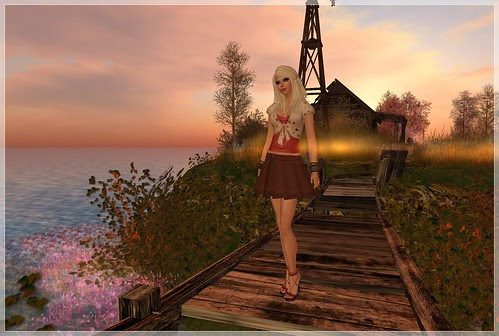 Over on plurk, I've been seeing a lot of "families" lately. It seems like a good number of people on my list are now brothers and sisters and aunts and uncles and even moms and dads. I guess I kind of wonder how this came to be. How do you approach someone and say "Hey, wanna be my kid?" It's not that I'm against families in SL, not at all. It's just that I've never been actually part of one with defined roles. I've had friends that as a group, we have considered ourselves family, but... this whole thing with Auntie and Daddy, it's just unfamiliar to me in SL.

A few weeks ago when I was participating in a study on Second Life and the relationship I have with my avatar [which I never actually got around to talking about in here, now that I think about it], the professor conducting the study had asked me if I had ever been in an SL family. I guess it's something that I had never really thought about doing. And if you're in one of these families, what do you do? Do you have to hang out with your relatives? Or can you do as I do in my physical world and avoid most of them? What if you get involved with an SL family and decide you don't like them? You just leave? That seems a little harsh.

I guess a part of me is also a little bit jealous. I see these families on plurk and they have all these pictures together and they all seem so active and excited. It's a lot different than my own SLife. Not better, just different.

Of course, I'd probably just be annoyed if someone yelled ♦♦♦♦♣♣♥THAT'S MY SISSY♥♣♣♦♦♦♦ everytime I walked into a room anyway. LOL

Posted by Alicia Chenaux at 5:08 PM

I only have one SL family member, my Sister Marja. We met some 2½ years ago and we quickly realized we were extremely alike.

First time we called each other Sisters were for a bit of a gag. We wore matching outfits and had each other names as grouptags to confuse people. Then it just stuck. I can't imagine my SLife without her, she is my constant.

wow the graphics are amazing, you could post some of you work here

I've never had a sister in SL either... but being an only child in real life, I'm not sure I'd know how to behave with one!