My friend Rob made these shirts for men, but he did a girl version as well. It made me laugh so much, I couldn't help but wear it today. :) Although...I would have liked it in pink! 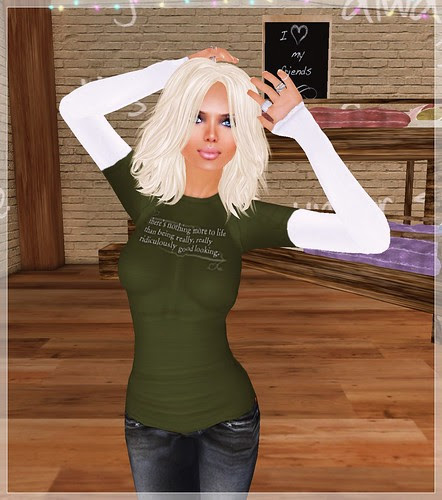 If you can't read it because the pic is small, it says "There's nothing more to life than being really, really ridiculously good looking." It made me laugh because I think that's what some people honestly think I believe. And yeah, I love beauty, but I'm not THAT bad!! If you're a guy, be sure to go check out his store, FIR. :)

Last night I was talking with an old friend from high school. I say friend, because there's not really another word, but I don't really consider us friends currently. We've known each other since we were 15 and she's one of those angry, wants to control everything type of people. If she was in SL, she'd be the type who expects everyone to play by her rules. We don't talk often anymore, just because of this, but when we do talk, she leaves me almost as tense as she is. The one thing that really gets me is how she has held a grudge on people from YEARS ago. Every time we talk, she brings up how this person was mean to her in 1995 or that person was a bitch in 1997. And the biggest problem is that she expects ME to be still angry about it for her, too. Last night I asked her what did it matter anymore? A lot of this happened over 10 years ago. Was a guy not asking her out when she was 16, or a girl not wanting to be her friend when she was 20 REALLY matter anymore in the grand scheme of her life? Apparently it does, because she became incredibly defensive and hung up. I suppose I'm now on her grudge list.

It got me thinking, though. I'm not one to hold a grudge. I find it a waste of time and energy. Even more so if that person has not done anything directly to me. I'm not saying that there are not people that I dislike. No one likes everyone 100% of the time. But truthfully, I do not hold a grudge. If I don't like someone, I just ... don't pay attention to them, I guess. I don't read their blogs or shop at their stores or anything. Mute, ban, poof. But to hold a grudge...that takes energy, and I'd rather spin it around and use the energy for something better. But is it the right way to be? Do grudges have any purpose? I don't know. I don't think that they do, but maybe I'm wrong. I just know that back when I was doing the therapy thing, this was a quote that was on a card that I think kind of applies to this: "Holding on to anger is like grasping a hot coal with the intent of throwing it at someone else; you are the one who gets burned."

In other SL news... There's a little store that I like called Blackberry Jam. It's not a big store, at all, but the items there are totally cute! I love when creators do fun stuff rather than just fashionfashionfashion all of the time. Blackberry Jam is where I had gotten that cute red & yellow baby car a few weeks back. Today I stopped in to see what was new and came out with a kite. 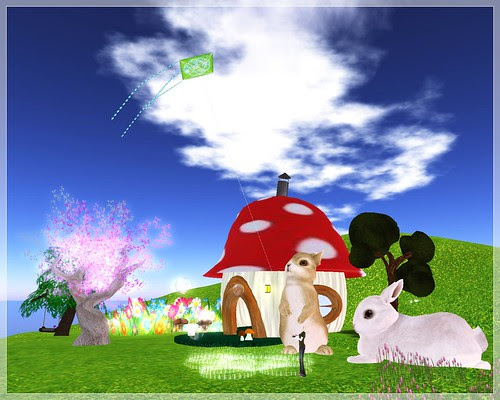 The kites are $49L, but you have to buy the AO that goes with them for $199L. But still, I've been entertaining myself for over an hour with this thing, and that's pretty much worth any price.

An SL grocery store that delivers in RL. mmm...

With the Farm Fresh grocery store here you can order online and pick it up for $5 extra. I haven't done it, but I have friends that do, and say it works well.

Sunday is grocery store day for me too. :-(

I've never seen anything good come from a grudge. I think you have the right idea.

Yeah! People who hold grudges are SO FREAKIN' LAME!!!!!