Happy St. Patrick's Day! I'm not Irish and I don't really celebrate it, but I do make sure to wear green just to avoid pinches. Hmm...maybe next year I'll rethink this. I ran out to get a green shirt for my male alt for a post on the style blog [I wanted us to match] and so I figured since I had him on, I might as well take a pic for this blog. Lots of green in this photo! 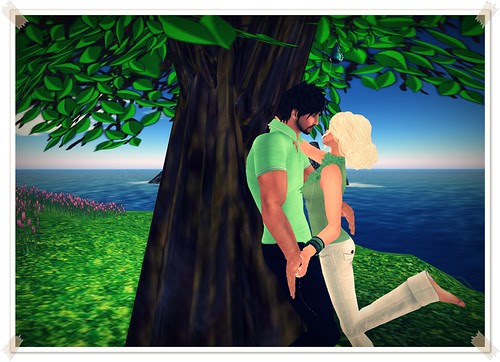 Last night I received Dragon Age: Awakening, the expansion pack for Origins. I've put in a bit of time playing so far [I'm worthless without a walkthrough, I've discovered] but it's been ok. There's a lot more fighting than in DA:O, which I suppose for some would be a plus. And there's a bit less interaction with the party members. And yes, I completely miss the romance aspect, as it is not in DA:A.

The worst part is that I had to uninstall my mods to get the game to work properly. With the mods installed, the darkspawn wouldn't look at me. They were just hanging out. So after I uninstalled the mods, I went back and imported my 2nd character, Alyssa, because I had gotten the closest to her and she had become queen at the end of DA:O. This is what she looked like when I played through with her before. 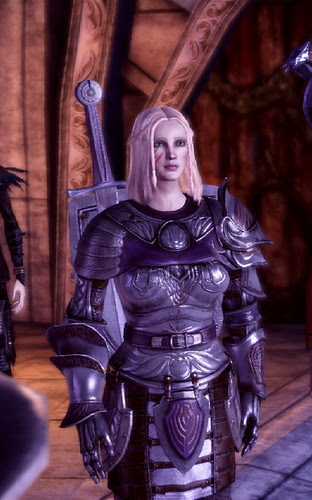 Unfortunately, with the mods uninstalled, something happened. And my pretty character... well, she ended up like this. 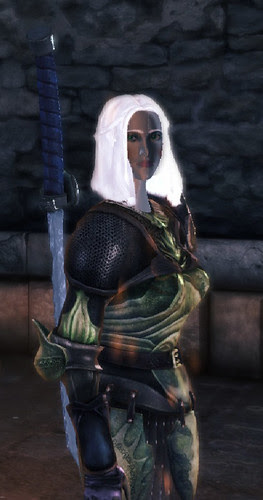 I don't get it either.

I'm eager to get through the game, though. But I do hope there is a patch at some point so that I can keep my mods & still play correctly.

Ok, I feel nerdy writing this post, so I'm going to go stare at my clothes or something.

Posted by Alicia Chenaux at 5:45 PM

I'm still meh about Awakenings.. No Alistair makes me a sad panda, he's not even been mentioned in my Mage's playthrough and we were supposed to be rebuilding the Wardens together. :( (Yes, I took the game wayyyy too seriously lol) Which mods were you running? There's a way to remake your character's appearance using the toolset.. the gist of it requires you to make a new character with the face/hair you desire and then copying that headmorph to your current character's last save.. you may be able to fix her up that way. Though I haven't tried that with an Awakenings save.

Alistair did show up at the keep for a few minutes in the beginning, and he knew we were married, but he couldn't stay. I'm trying to bring back the mods one by one to see what stays and what breaks. I miss Auto-Loot! LOL

This is a very interesting blog. I love how honest you are. What exactly is this avatar you created, like what program is it from?

Bailey - I use Second Life and that's where my avatar and almost all the pics in this blog are from. :) With the exception of this post, that shows my character from the video game Dragon Age. If you'd like to learn about Second Life, check out their website! I've been in SL for ages, and I certainly don't have any plans on leaving any time soon. :)