Today was Gabby Panacek's 3rd rezday! Codie put together a nice little surprise party for her, and it was really fun!

The rezday girl, with Codie dancing nearby. :) 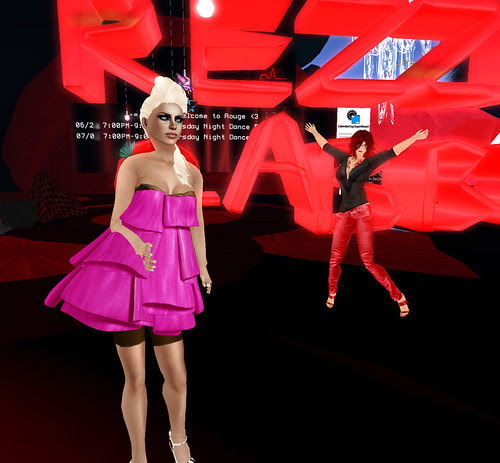 I so so apologize for the quality of the picture. I attended a taping of Paisley Beebe's show last night and had turned all my stuff down to attempt not to crash.

Gabby is one of those people that you cannot help but just adore the stuffings out of. Yes, she's gorgeous. Yes, she's smart. But more than that, she's genuinely kind. And that is something that you just have to admire. :)

I was really happy to see so many of my friends there, especially those that rarely make it to events these days. 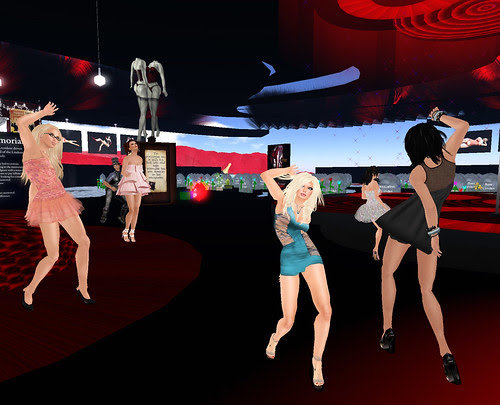 I spent the day happily inventory deleting while I listened to/half watched movies on Hulu. I had a massive MASSIVE amount of textures from group notices, ads, and reader submissions for WTFug. After boxing everything up [because let's face it, I wasn't going to really go through them all today], I deleted almost 3000 textures. I've gone from 72k to under 66k in the past few days. There's still a LOT more to go through, but I am feeling way better now that I have a little more room to move around in there. I've also discovered a few things.

1. For some reason, I've collected an ungodly number of bunny ears in the past 2 and a half years. They're not part of any sexy outfits or anything. They're just...bunny ears. Sometimes they come with a tail, sometimes they don't, which is pretty weird.

2. There's a LOT of ugly jewelry in SL, and I apparently set out at some point to collect all of it. My Jewerly Expo 2008 folder was laughably bad. My Jewelry Expo 2009 folder was actually not all that much better.

3. Some people seriously need better friends, because I know most of my creator friends ask people before they release something, and I always give them an honest opinion on if it's crap or not. Obviously? Some creators have friends just yell "OMG IT'S AWESOME!" even when it's not.

I need to get back to deleting and getting some stuff done before bed. Goodnight!
Posted by Alicia Chenaux at 12:33 AM

I love your dress Alicia, does it come in pink?

Yep, it does! It's not a bright pink, but kind of a soft salmon pink. Very pretty!

Thank you so much for the kind words, Ali! I'm so glad you could come out last night! I was well and truly surprised and so happy that so many of my favorite people could be there.