If you're looking for the topic of the day, it's over here.

Today's topic came easily to me. It was one that was in my head long before the Linden layoffs, before 2.0, before I had the date set down for the challenge. It was one that I knew would be included because every night when I go to bed, it's one that I attempt to answer in my head before I go to sleep. Three positive things. There has to be three positive things in my life. If there aren't, then obviously I am doing something wrong. Yes, ME. In those moments, I do not put the blame on anyone else if I am unhappy. Oh, I could. Anyone could find something or someone to blame for all the mess in their life if they think about it. But in those moments before I fall asleep, and so often I do fall asleep thinking about it, it's only about me.

I hear the grumblings all the time. Second Life sucks, Lindens are morons, people are stupid... But it makes no sense to me. Why stay? Second Life, unlike our physical world, is not something that anyone is forcing you to do. The last I heard, no one put a gun to anyone's head and said, "Log in."

[Although, that sounds like a great idea for a show. Being forced to be an avatar against your will. Shop and dance or you die!]

So obviously if you are still logging in, there is a reason. A GOOD reason. A POSITIVE reason.

Three positive things going on in my SL right now...

1. I feel really creative there lately. I go through phases, as I think we all do, of just not doing much of anything. I log in, stand around, flip through some clothes, IM once in a while, and go. But right now, I have ideas and thoughts and I'm decorating and re-texturing my house, and thinking about projects in the future, and coming up with photo ideas in my head that probably will never happen, but just the fact that I'm thinking about them makes me happy!

2. I haven't had to worry about the island in a while. Not last summer, but the summer before, I was really really struggling at this time because I had a renter go MIA and still being new to the whole land thing, I let it lapse far longer than I should have. [Anything for a friend, right?] And then last year, I was having kind of a high turnover rate with a few smaller plots, and it was starting to get to me. But for months now, I haven't had to really worry about empty plots or late tiers. I'm so so happy with the island and my friends who live there. They are the ones who make the island beautiful. If it were just me there, it would probably look like a hot mess.

3. And who can have a positive SL without friends? Sophia came back to SL, much to my joy. Even if we don't get a chance to see each other, just knowing she's around makes me feel a whole lot better. I've also gotten close to people that I never expected I would. I think we spend a lot of time looking at people on the outside, never really talking to them, and thinking "Oh, she's a snob, he's a jerk, she's this and he's that..." When you actually TALK to someone, you discover a lot more than you ever realized. You discover that they are just as silly as you are, that they have the same fears, the same thoughts. You kick away those false impressions and you actually make a friend. There's really not a lot more positive than that. 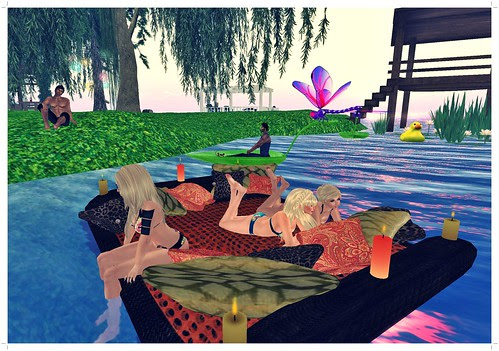 I can't wait to read about the positive things you guys come up with! :)

Posted by Alicia Chenaux at 8:39 AM

I love this topic. Thank you so much for the suggestion!