One of my great loves in SL has got to be beta testing. I really just love it so much! So when Aldwyn was asked to do a runthrough of Ryker's new Halloween game, and asked me if I wanted to do it too, I JUMPED at the chance! 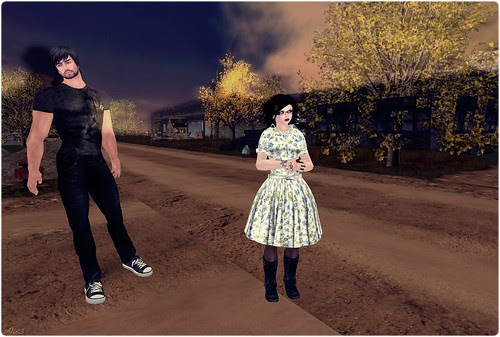 The game is pretty cool and if you enjoy hunts & solving things, you'll enjoy it. A ton of work has been put into it and it definitely shows. We had a great time running all over and finding clues. Al pooped out on me near the end and said we'd finish tomorrow. I decided that wasn't good enough and I found the remaining clues, caught the killer, and finished anyway. Don't tell him!

Oh. He reads my blog. Oops.

The only complaint I had was that I thought there were too many clues to find. But this could be just because I hate hunting for anything for too long, and the clues are definitely NOT in your face. You will spend some time out there, but if you have to do it in sections, the detective's HUD you wear keeps track of all the clues you've found and all the witnesses you've talked to. I crashed a few times and it never reset on me, so yay for that! I would not suggest going at it alone, although you could. It's much more fun if you grab someone to go with you, or even a group. I would also suggest using Skype to chat while you hunt for clues because you will be ALL over the place and it's much easier if you can just talk. You could use SL voice, of course, but if you crash, then it's such a pain to get back into a voice conference with more than 1 other person.

I'm so tired, I don't know if I'll make it to the bedroom. But I suppose I should try.

Posted by Alicia Chenaux at 1:06 AM