Dress Me Up Challenge - Suggestion 2

I really am having way too much fun with this challenge!! My wallet is suffering, but hey, it's been worth it! :) I'm really having fun looking at what others are doing, too. It's fun to see people step out of their usual comfort zones. :)

My second suggestion was from Lilla, who said she'd like to see me in something from Gypsy Soul. I admit, I had no idea what she was talking about. LOL! I had never heard of the store before. As most everyone knows, it is VERY rare that I ever look at the fashion feeds, so I am not always aware when a new place opens until one of the people in my group talks about it, or if I happen to stumble onto a fashion blog.

I absolutely LOVED this store. Everything was so cute and just my style, too! There aren't a ton of outfits, but what was there was just so cute and awesome for the winter months! I stayed in there for ages trying to decide exactly what I wanted, and I ended up buying this outfit, called "Snuggle." 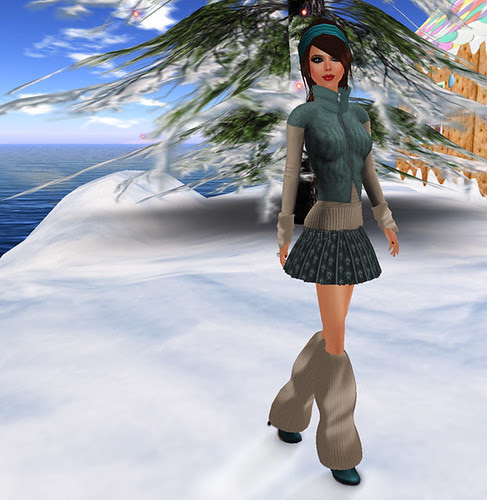 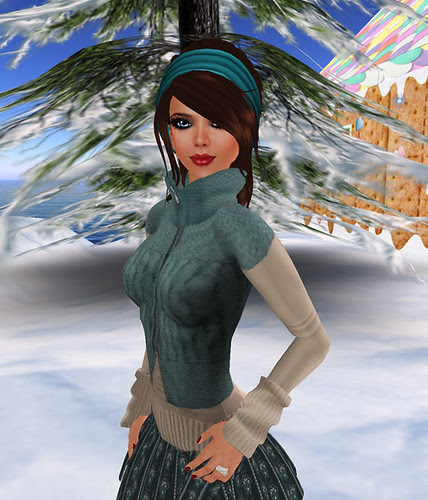 It combined some of my favorite things - cute little skirts, sweaters, legwarmers, and a shade of blue. I paired it up with the Laine hair and the Kristin short boots, both from ETD. [Btw, I love the Kristin boots so much!! I had to buy the fatpack, and I almost NEVER buy fatpacks of anything!]

Now, just so I'm not pooping rainbows about the outfit, there were a couple of things I wasn't too fond of. First, the legwarmers were a little small for my legs, and based on an "average" SL avatar, I have fairly thin legs. I had to do quite a bit of editing to stretch them to the proper size for my height and leg size. It's possible they'd fit an avatar like Aisuru, who is smaller and more petite than I am, without any problems. But on the average SL avatar, they will probably be quite embedded and require adjustments. I would have said that the entire outfit was made for a smaller avatar, but the prim skirt had to be made smaller for me, so I don't know what happened to the legwarmers.

Second, the "shadows" of the outfit are a little harsh. If you look on the first picture on the inside of my left arm, you can see how it looks like a shadow up until the prim cuff. And while that is nice for some pictures, if you have a pose that has your arms up or something, it just looks very dark. I appreciate the designer attempting to texture to that degree, but it's a bit unnecessary.

I did REALLY like the shop, though, and hope to see more items from there in the future!! Thank you SO much for telling me about it, Lilla!!

There's still time to play dress up with me, so check this post if you want to leave suggestions, or grab the rules to play too!

Posted by Alicia Chenaux at 5:21 PM

The blue of those clothes and the band on the hair really bring out the blue in your eyes! Good choices!