Not much going on in my SL lately that's really all that blogworthy. The group has been obsessed with the word "Buttsecks" lately, which cracks me up each and every damn time. They're so freakin' quotable I could start another blog just with quotes. We learned Nikki is a dirty pirate whore. Laleeta is apparently the best buttsecks around. I got freebie hooker boots and Brody says he could rent me out for loads of money. Sophia and I are *this* close to completing our 5 Day No Shopping Except Freebies, Dollarbies, Group Gifts, and Lucky Chairs Challenge. Tomorrow is the last day. \o/ But I'll tell ya...without shopping in SL, I don't seem to have much to do lately. Which makes me think I need to get back into building things, or at least clean my inventory. Umm...I think I was supposed to be doing that anyway, as part of the challenge. Oops.

Last week some of the girls got together and we forced Sophia's husband to take a picture of us while in our schoolgirl outfits from The Sweetest Goodbye. He did a marvelous job, as always. We do appear to be reform school girls, though. But that's not the fault of the photographer. LOL 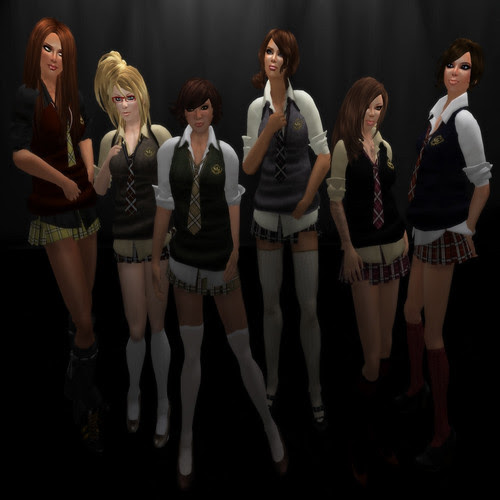 Posted by Alicia Chenaux at 1:25 PM