I really have some awesome readers! Yesterday I was standing around and I got a gift! 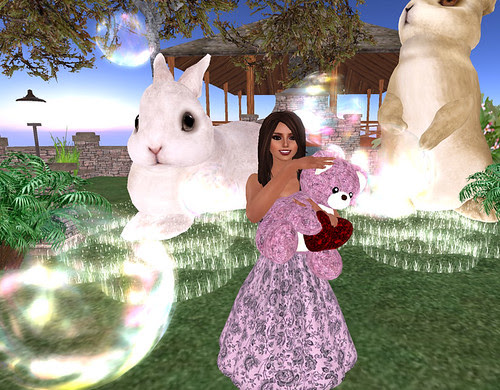 A pink bear and I can hold it? It's perfect for me! Thanks Caitlain!!

I have to admit, I spent quite a bit of time yesterday just sitting in the garden holding my new bear. I've been in kind of a weepy girl mood lately for some unknown reason. I don't like being alone for too long in SL, and I am so incredibly lucky that my girls won't let me be alone for too long. We had a super impromptu party at my fiesta area the other night. They grab me for shopping or other parties or to come see this or that. It keeps me from staring too long at the bottom right hand corner of my screen. lol

One great thing about the girls dragging me off the island so much is that I get all kinds of fabulous pictures for WTFug. LOL Such as this picture from a absolutely horrific bikini contest Sophia unknowingly took us to. Seriously, in her defense, she thought it was just a bikini party that her friend was DJing, not some crazy bikini contest with voting and junk. The girls who entered were...well, they... oh just look. 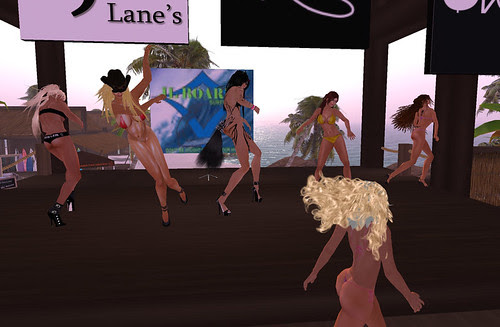 Booty McTits down walking in front of the stage down there is the one who ended up winning. Oily St.Male came in 3rd. We'll see Oily again in WTFug in a closer picture.

And laggy? Oh man, was that place laggy.

Meara Deschanel: everyone is still rezzing - wth is this?
Sophia Harlow: hell, i think

Sometimes I wish the contestants hadn't rezzed for me.

The best part about the contest was the emoting the girls were trying to use to catch the votes. Such as...

Candy Moundfuzz grins wickedly as her body moves, moving in a lustful frenzy pace. Her body wanting to feed that sweet agony of teasing. As she lets out a demanding roar, her eyes darkened, like orbs of fire, blazed with that sinful lust. Her hand reaching out, holding that forbidden apple, daring you to take that first bite,to give into your most taboo fantasy and temptation.

Oily St.Male slips her fingers into her bikin straps and pops them against her silky skin [Silky? She was sweating Crisco!]


Yeah. We were crying with laughter because it was just that damn bad. LOL!! Watch out for Candy's orbs of fire!! I was also sure that Booty couldn't get on the stage with the other girls because she slipped on all the oil that Oily was dripping all over and never could get back up there. It's ok. She made her own little stage in front. Whew, I bet you were worried, huh? And then she went on to win. Way to go, Booty!

It's wet and cold here in my RL today, which makes me a sad panda. So I think I'll log into SL and soak up the virtual sunshine.

They seriously typed all that out? Omg...

You are so welcome Alicia! Enjoy! Glad it made you smile! =)

OMG...look what you are making me do: Who took second place?

Here is my theory based on your report on this contest: erections cause lag.

*giggles* I still think my favorite part of that was what Oily's Evil Titler came up and I changed it to "Moves hipnotically". I laughed so hard I cried. If it had come up again it would have been "MY PUNAN VIBRATES" for sure (lmao)

Krissy - Oh yes, they most certainly did. It was BAD.

Tymm - LMAO!! Umm...either the neko or the blondie in the Hustler bikini. I was so busy laughing, I kind of missed it.

Meara - Oh I WISH her titler had come up again! That would have been SO FUNNY!!!

Oh, heyyyyy.....I need an invite to your place again when this stuff comes up, too! O.O

ROFLMAO at the long emoting...