Inventory Cleaning CAN Be Fun!!

Inventory sorting usually sucks for me. I am not decisive enough about clothing, so a lot of the time when I'm doing my sorting, I'll think, "Well...it's not THAT bad. It's almost cute. I could wear it with that other thing..." and then I keep it. And that is how I managed to get my inventory up to almost 40k. I've been trying to be a little more ruthless lately in preparation for that crazy hunt that's starting next week but unless it's an outright mess, it's still been a lot of "Well...."

But last night some of my lovely girlfriends came over to a skybox I set up and we hopped on posestands and got to work. 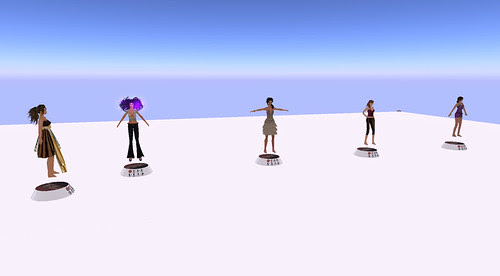 There was a lot of naked going on. :) But it was SO fun!!! The main rule was that if we said to trash it, it went and no hurt feelings. There was a LOT of "OMG, wtf is this?!" "What was I thinking???" and "Uh...you need to throw that away - NOW." Oh man, I laughed so hard last night. It was EXACTLY what I needed and I don't know why we haven't done this before.

Of course, sometimes we just got silly. We were 3000m up in the air. I think we were a bit lightheaded. Sophia and I found kitty scooters in our inventories and went for a ride around the box. 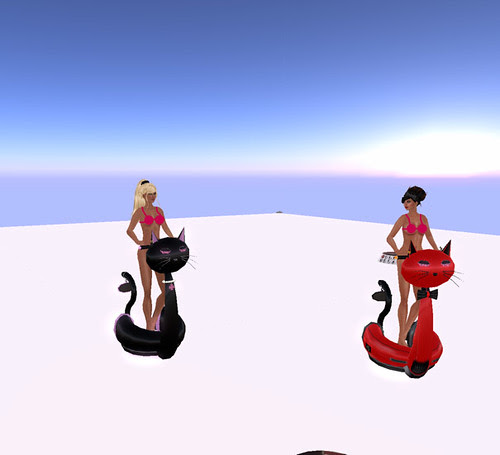 I added those bikini tops on us for modesty. LOL!!

I ended up getting rid of about 700 things and finally got my inventory just under 38k. I even finally finished sorting from the ghost hunt!! But there is still so much I need to sort. Mostly things that aren't clothing. I'm really bad about picking up just junk. Scooters, window panes, pillows, things like that. I'm going to do some more sorting later, if I feel like it.

Near the end of our craziness, we all got into wedding dresses to go run after newbies and scare them. 3000m up, lightheaded, and it was really late. It seemed like a fantastically funny idea! 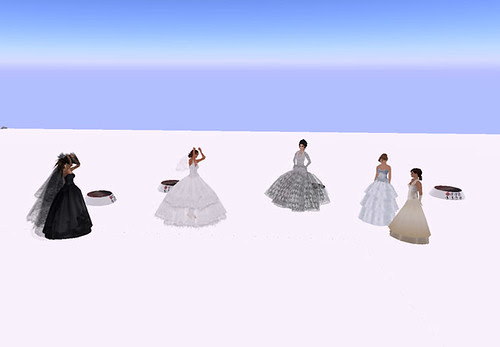 Luckily for all unsuspecting newbies, SL decided to REALLY screw up and we couldn't TP anywhere and I eventually crashed mid-TP and couldn't get back in, so I just went to bed.

So thanks to Meara, Sophia, Khari [who is now my neighbor on the island!], and Sehra for a very fun AND productive night!! Love you ladies!! <3

Ahhhh can I come next time!? Group therapy would make it so much easier to stay motivated during the god awful sorting procsess! Btw..Your philosophy on keeping things sounds EXACTLY like me lol

That was so much fun!! And productive-- when I sort alone I tend to spend fifteen minutes sorting and then an hour or so in IM. We'll have to get more of the girls in on it, since you KNOW we'll need another sorting party after this upcoming hunt.

Speaking of hunts...*slaps forehead* I totally forgot to go through my POE folder last night!! And that was one of my main things I needed to go through. How dumb can I get? =P

What a great idea. I told someone I was going to trash some of my start up clothes by a well known designer and she said they were fine, and I should keep them. hmmm.... I'm sure group reaction would help me pare mine down.

OMG I want to do this next time you have one! I have so much CRAP in my inventory it's not funny (over 40K)!