Tonight I'm hanging out at Rune's place. We're usually over my house, but tonight we were over here. He went to bed, but I'm still here because I'm lazy. 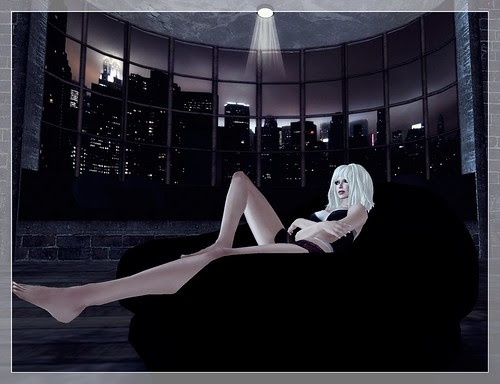 I am usually pretty good about checking objects and scripts on Bluebonnet, just to make sure all is running smoothly. But I haven't checked the prims on my parcel in the past few days. When I checked today...oh, what do you know? A squatter!!!

A quick check of the scripts found that someone named citymen Ireman [oh yeah, I'm calling him out] had set up somewhere almost 4000m above my house. We went up there and...oh my god. Look. 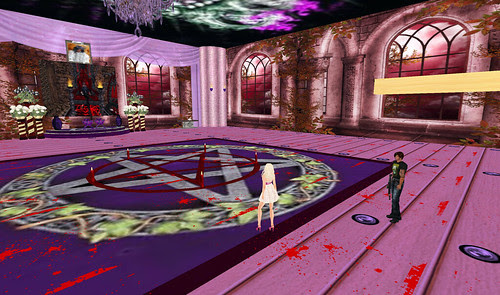 Not only was this horrible club like setting there, but he had vendors for Bloodlines products up on the walls. What the heck?

What in the world possesses someone, someone who is NOT new to SL, come to a pretty green sim, with nothing but houses around, and decide to set up a garish pink "vampire" club up in the air? Obviously he must have known that this land is not his. I suppose no one was on the island at the time? I know I wasn't or I would have noticed all this going on. It just really annoys me because if there's one thing I have always told any new residents I have met, it's that pretty much any land that they are on, someone is paying for it. So what's an annoyed land owner to do? Return all the objects.

Maybe he'll think about that the next time he decides to squat on someone's land. Oh, and Rune decided to kill it with fire before I sent back the final few prims. 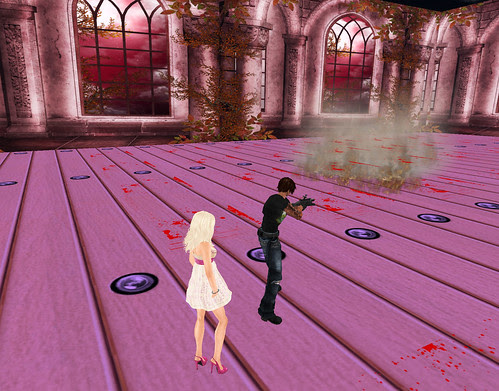 Tomorrow is Trivia Tuesday at 7pm SLT! We'll be in the game skybox. Wear anything you want, but usually we dress comfy - in pajamas or whatever. Hope to see you there!

I know you went through Rune's pantie drawer while he was gone...

I know it's not really funny but oh my goodness Ali when I read that I almost peed my pants laughing. You couldn't just have a generic ordinary squatter. You had to have a freakin Satanist nightclub!!!! hahahahah That's priceless! I'm glad you got rid of them :)