I am SO excited. I got the tracking number and my new video card is scheduled to be delivered on Tuesday! Can I get a HELL YEAH?! It has been horrible working off whatever internal default piece of crap I don't even know what all card the past month. I'll be low lag again. I'll be able to go to stores with my friends and not have to say, "Yeah, I know we've been here 10 minutes, but I'm not rezzed yet." I'll be able to see dances actually moving smoothly, not the mostly jerky thing I see now. [Noel and I went to get some dances today. He wanted my opinion but unfortunately I couldn't really give much of one being that I was running at about 3 FPS at the time. So so sad.] I'll be able to see terrain and shiny and local lighting again! AND I'll be able to take decent pictures again without practically crashing after each one!! I am so happy.

Speaking of happy, we had a fab hump day party! When I brought up the Fairy Tale theme, I could feel my friends cringe. But they definitely outdid themselves on the costumes!! So many great great outfits and I hope someone got some pics. I managed to get one and I tried to fix it up in Photoshop to make it a little less icky. 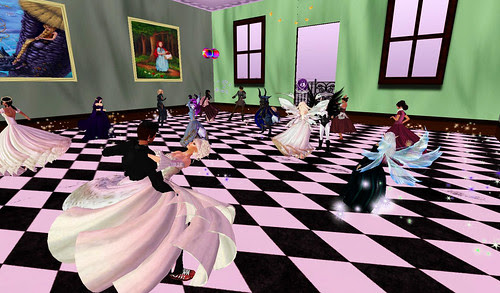 The party was just so much fun and there was a BIG discussion about living in a place called Poon. I <3 my friends. They are seriously the most amazing people you'd want to meet. :)

And yeah...I went overboard on the sparkles again. I have a sickness for my sparkly stars!! They even managed to get into this pic and I swear they weren't there before. lol 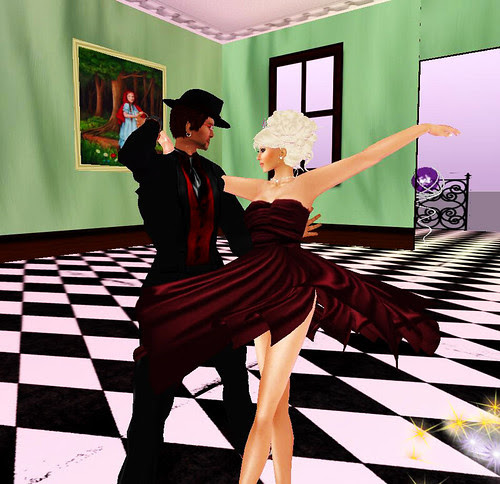 Right before I was going to log off for bed, I went to check on the chickens. Pollo Sophia wasn't doing too well earlier because she forgot where the food dish was. Well, to be fair, she just got a little confused. We had 2 dishes out because Noel needed to upgrade his rooster, and after that food was gone, Pollo Sophia forgot there was another bowl. But she's doing way better now. [Pollo Pumpkin never ever forgets where the food is.] So as I was about to walk away, I noticed something running through the flowers.

WE HAD A BABY! 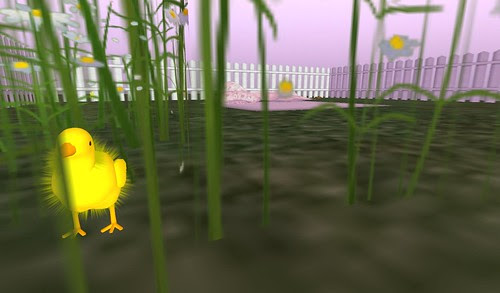 Meet Pollo Lola, the shankingest chicken on the block. I don't know which of my puta pollos had her, but I'm betting on Pollo Pumpkin since Pollo Lola seems to follow her the most. I'm just so sad I wasn't there for the egg hatching!! I didn't even KNOW. I was upstairs partying and there was life being done down below.

Posted by Alicia Chenaux at 3:50 AM

OMG! Congrats!!!!! We've had a bit of a development, still trying to figure it out atm!

congrats on the new baby woot <3