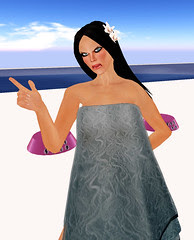 I couldn't think of a better picture to put for this post. Sorry, Soph. LOL! I wish I'd gotten more as you used your HUD, but I was laughing too hard!

I started The Bunny Hop hunt last night and I have one thing to say. Well, ok, several. But one main thing to say.

If you put some half-assed mess that you made in 2004 or ripped off from someone else or got from a business in a box, I will publicly call you out.

I have several friends who are in the hunt this time around. I've watched them for at least the past month work hard to come up with something original and fun for this hunt. They've stayed up late, they've stayed up later to work with the hunt coordinator, and they did it with a smile. I'm offended FOR them that other designers would put just any old rejected item in their egg.

It's true. More than half of what gets picked up at hunts gets deleted. If not within the next week, then within the next few months when 50 new gridwide hunts pop up and we need to delete things to make room. My friends and I had one of our inventory parties last night and I watch them as they try things on, wonder why they got it or what the hell it is in the first place, and then throw them away. Once in a while I see them say "Oh, this is very cute!" Then I watch them later go back to the store where they got the cute thing and drop buckets of $Lindens on other items. I figure my friends and I are pretty normal shoppers [ok...maybe a little bit above normal...considering the shopping we do], and others out there are probably doing the same thing.

Why in the world would you put some piece of crap in your hunt egg or heart or whatever and make people think, "Wow...that sucks. I'm never going to that store again. I can't believe I wasted my time in that store." If hunts are supposed to be for advertising your store [not really a great way of advertising, but that's my opinion], why wouldn't you put something in there that is representative of your work? Makes sense to me.

I'm actually excited for this hunt. I've already hit up the stores of my friends and love their items. Some of the things I've seen so far are SO cute. But those of you thinking you can just grab some freebie off of Xstreet or a ripped skin and call it a day....


Oh, and can you all stop sending out starter eggs? If someone doesn't have one by now, they must be under a rock or don't belong to a single group, and they probably aren't interested in hunting anyway. :)

The picture is so funny! I just love the expression on her face! it perfectly symbolizes the frustration you are talking about!

I am really trying to resist the hunt this time, but I keep running across eggs just in my normal shopping. If this continues I will start to feel like I need the whole set. :-(