Should I be glad I didn't win? LOL

A few days ago I received a notecard and an object from someone I didn't know. This isn't exactly unusual, so I saved it and didn't look at it until later that night. Somehow, I was nominated for Best DJ for an awards thing I'd never heard of. I didn't win [which is good since I had never heard of it and didn't attend the ceremony] but they wanted me to have this token of my nomination. 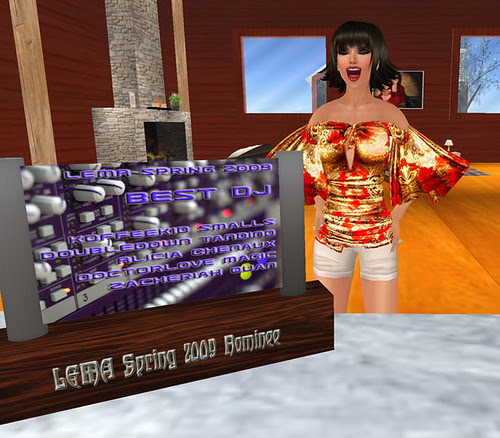 Do you recognize any of the names? Me either. But, big thanks to whoever it was that nominated me.

/me smiles brightly for the camera. "It was an honor just to be nominated!"

Rofl! And by the way that shirt is cuuuute

Lala - Ty! It's from Bijou. There's another pair of shorts that go with it, but I didn't like them, so I paired them with some shorts from an Armidi outfit.

Terri - The hair is 'Oxygen' by Abyss. One of my faves, but for some reason, I forget about it frequently.

Congrats, hoodrat. You're a good DJ...it's been confirmed now! <3