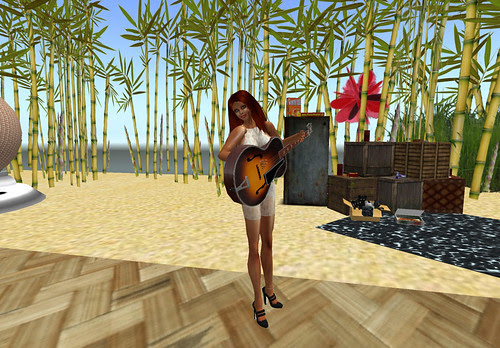 No, she's not a WTFug post, although she could be with that skin.

I met Didine today on my island. About 1000m up in the air, as a matter of fact. What was she doing? Why, just playing the guitar, putting out decorations, and basically just setting up a home.

I have no idea who she is.

I have visitor counters scattered here and there throughout the island. I do this not just for me, but for the people who rent there. Everyone enjoys relative privacy and I realize that there are people that they have issues with so if I'm not asked to outright ban certain people from the island, I at least try to keep track of things. Any decent island owner would do the same, so it's nothing major to me to do it.

Earlier this morning someone named KaSim showed up on the island. I didn't thing too much of it, people stop by all the time. This evening I was hanging out here at home and I decided to check the scripts for the island. Just something I do now and then to make sure we're running as low lag as possible. I notice a name on the scripts that I've never seen before. They were using quite a bit of scripted rocks and plants. Well, that's odd, I thought. So I make a beacon and fly up to see what's going on. And that's when I met Didine.

Didine and KaSim apparently believed this land to be free. Or maybe they believed that if they were 1000m up in the air, they would remain undetected. Didine was just standing there, playing the guitar. She wasn't away, because she walked around a bit as I hovered there, ignoring my IM and question in local chat. Noticing that the floor she stood on belonged to KaSim, I returned it first. As she was plummeting to the ground, I returned the rest of her stuff. I guess if I'd been in a mean mood, I could have orbited her and then returned the stuff.

If either of them were new, I guess maybe I'd be more understanding. But she's been here almost a year and he's been here almost half a year. That's plenty of time to understand that you don't just set up home on someone else's land. And I'm not mean. If any of my friends ever need a place to come set down a house to check the prims or if they need a place to build, they're always welcome to do it because I know they'll clean up after themselves. But 2 people I don't know using up a load of prims and ignoring me? Oh no, I don't think so.

Thanks for the laughs, Didine. Sorry you didn't find your home, but maybe one day you and your buddy will get enough scratch to get some land. Oh, and I'm sorry I kicked you out and banned you. Wait...no I'm not. :-p

This is a very good thing to remember: If you're not on Linden sponsored land, someone has paid for that land you're standing on. You may visit, but don't take it personally if they choose to throw you off that land because they paid for it, and they may do as they wish.

And don't wear orange skin with face oil on it. That's just not good.

Posted by Alicia Chenaux at 6:26 PM

That's just brilliant, Alicia. I can't believe the nerve of some people though. Showing amazing balls to try that.

Hands up who reckons they'll just move on to the next place and try it all again?

I had some guy wander into my house the other day-no clue who he was. I had walked away from the computer and he was standing next to me. He left b/c I didn't respond. So I im'd my renter guy and he fixed the scripts on my door. What would you wander into someone's house?

And btw do you have houses to rent on your island :) or is it just for friends

Good for you! That is something that drives me crazy - especially with how much we all fork over for tier.

lmao I <3 you Alipants. You make my days brighter with your SL squatter drama!

Also was looking thru a sim with shoping. Saw what I thought was a poster for sale, walk in and inspect it. I get an IM asking me if there's something they can help me with. I reply, was trying to buy the poster. The (very nice) lady responds, it's not for sale, I'm in her house. I'm like OMFG, I'm soooooo sorry, the place was across the street from shops, door wasn't locked. She was cool and sent me a copy of the picture I was looking at. (I'm such a dork some times)

a while back my boyfriend and i came home to find a guy and a girl having sex on our bed o.o the guy had spoken to lucas earlier that day and added him to friends list, and felt that this was enough reason for him to "borrow" our house to entertain an escort.

i really enjoyed bouncing him all over the sim :D