Oh, just this and that.

I've been trying to think of a good topic to blog about lately [aside from fashion reviews] but most of my SL is very "you had to be there" these days. I can do the funny quotes, and I can talk about it, but unless you're there sharing in the immense positive energy that my friends put out, it's probably not as funny. :) No words I could come up with would really describe it, I guess. Or I really am just still stuck in a big ol' writer's block and I can't come up with the proper words. That's really probably more it. :)

But, I do have pics, and they DO say pictures are worth a thousand words, right??

We had a hump day party on Wednesday, and I think my favorite part of the entire party was when Aisuru pulled out her enormous hair. 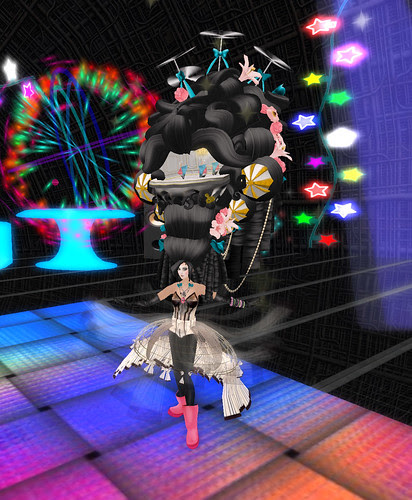 Oh man, I almost fell out of the party ball when she put it on. The hair has its own dance floor! Flowers, bows, beads, propellers...it was unbelievable! Of course, the theme of the party was "Overboard," and you can't get more overboard than that hair. 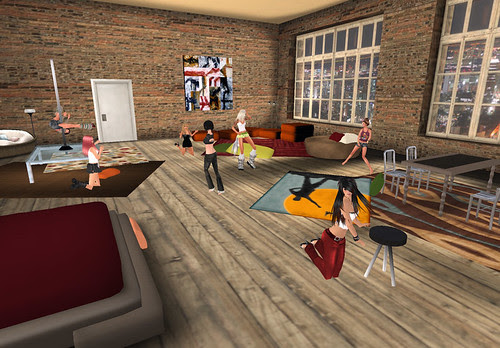 Saturday's evening at Sacred led to probably one of the funniest nights I've ever had in SL. I laughed so hard for so long, I couldn't breathe and almost wet myself. I didn't, but I could have. :-p I can't even explain it all, but these two pictures kind of sum it up. 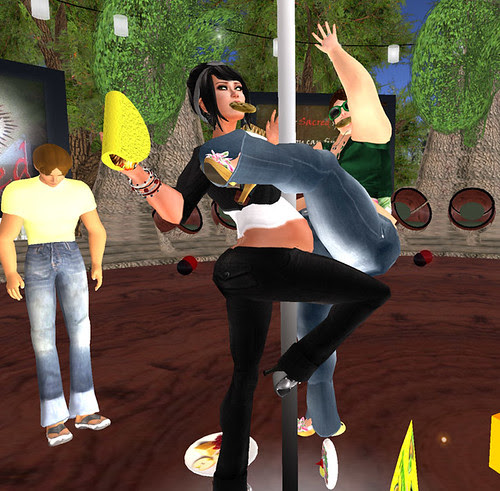 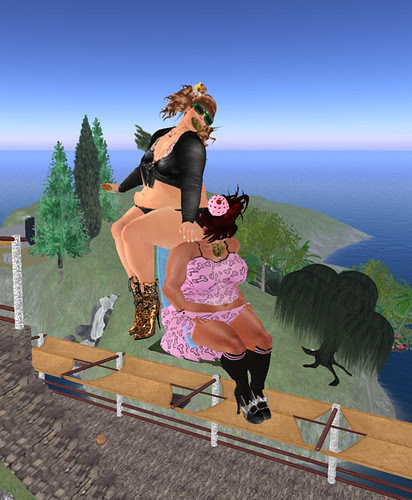 The funniest part [to me, anyway] was that the burritos we were holding had fart sounds. So as I was doing my booty poppin' move, I kept farting. And yes, I DO find fart sounds hysterical. :-p

[And before anyone starts in on "You're making fun of fat people in those shapes," the typist behind Alicia Chenaux is overweight and not in the least bit offended. Mostly because she was laughing too hard to be offended. :) ]

And of course, my kitten is still the biggest amusement in my SLife. I'm very rarely without her on my shoulder, and because Sophia & Sky always humor me, Sky did a photo with Elle and me. :-D 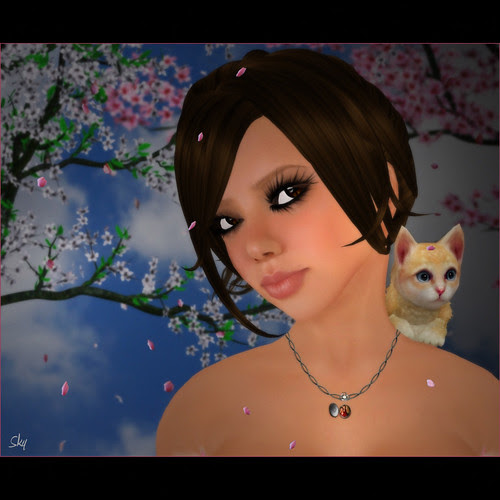 The little petal on her head kills me. Be sure to check out the Sacred Studio website to see Sky's other works, read the blog, and learn how to make your appointment. :-D

Oh, I do have a little bit of a bitch. If you read Emerald's last blog post, she was banned from a store in some hunt because she mentioned in a group that she, on occasion, uses an object scanner in these massive hunts. So after the holier-than-thou crowd finished berating her [get off your high horses, people], she went to a store and the owner was there and banned her.

Come ON. Really? The hunts are SO life changing important that they have to come down to THAT? The earth is going to implode if someone uses some help in a hunt to pick up your gift? Did you lose a sale by them getting help? No, because they were there to get a free gift. Will you lose a sale by banning someone? Very likely, as a lot of us who go on these hunts do so to see if we like anything in that store. If I like your hunt gift, I'll come back to shop. If I don't, I won't. Most people are the same, I'm sure. Banning someone because they used an object scanner or a cheat sheet or a friend who had already done the hunt...that's ridiculous. So I will say what I said on Em's blog:

I will use my cheat sheets, I will use my object scanner, and I will ask for help from my friends and if they want to ban me for doing it, they have that right. Just as I have the right to publicly call them out on my blog.

Of course, in these way too huge gridwide hunts, if you just put the gift out in front where it's easily seen, you'd save everyone some time. :-D It's the smaller, one store or one sim hunts where it's more fun to actually hunt around. Just an opinion on my part. :)

I think it's time for a pampering session with me, a chocolate mud face mask, and a slice of coconut cake.

Posted by Alicia Chenaux at 4:26 PM

Love the pics! I had soooooooooo much fun on Saturday! My stomach hurt like hell the next morning and my throat was raw, but it was worth it. You ladies never cease to amaze me with your antics!