You thought I wouldn't do it, huh?

Ok, so, we're less than 24 hours into the Bunny Hop and someone mentioned that #206 on the list, Coull Creations, didn't just have decoy eggs out, [A practice used by some designers to throw off the object scanners/hunt HUDs, which is really kind of a jerk move, but whatever], they had decoy eggs out that cost $25L. For just the egg! Nothing inside!! Man, it's like when you're a little kid and you go to some public Easter egg hunt and you run and get kicked by bigger kids and you end up with 3 little eggs and a squashed Peep, and then you realize one of your 3 plastic eggs is empty after you went through all of that!

When you first teleport into the area, you get excited because, hey! Big egg right there! What nice people! How fun to not have to...how...wh... $25L? 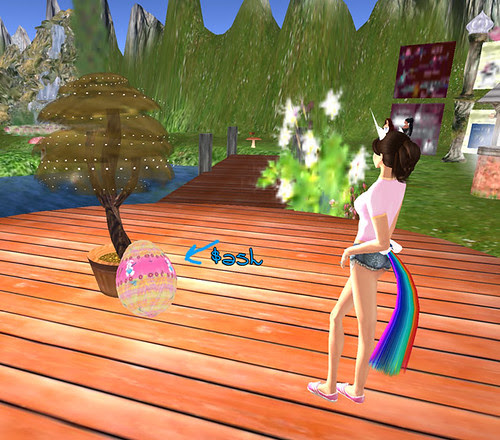 And yes, I'm totally wearing my unicorn set from my dear friend Aisuru's store, Beloved. You can find this set in the lobby at The Starlust for just $75L!! It's sooo cute, I just adore it!

Oh check it out, another egg! Surely THAT must be the real one!! 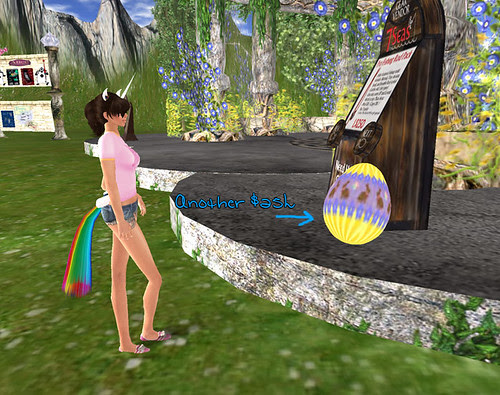 Look! ANOTHER egg! That must certainly be THE egg I've bothered coming here for! 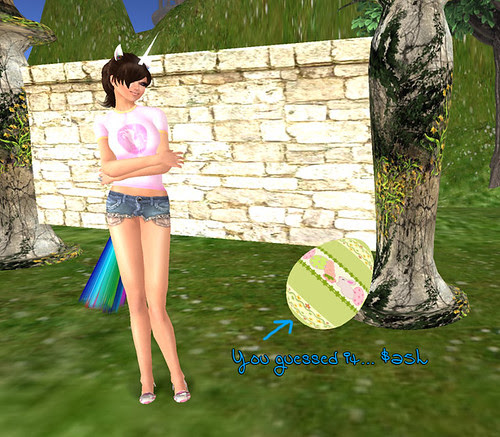 If you don't know to check, you could maybe end up spending $75L before ever finding the egg. With the hunts that go on once in a while that you DO have to pay for [such as the Malt hunt with the $50L gifts that were TOTALLY worth every last $L], you might think you're getting something. For $75L, I can buy another unicorn set. Did I mention they're by my friend Aisuru? Of Beloved? And they're in the lobby of The Starlust? *nudge nudge*

I did eventually find the actual Bunny Hop egg. 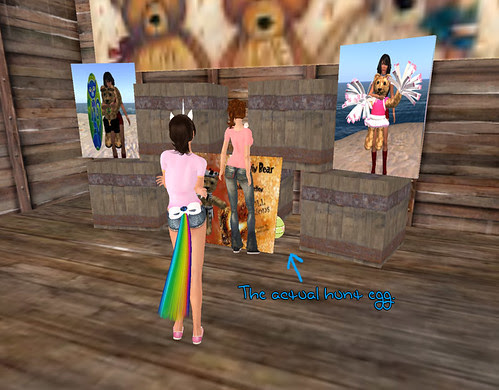 The gift is one that I might have liked had I not already been so put off by the decoy eggs. And the fact that...well...I appear to be molesting this poor bear. Hey, I like bears. I don't like them like THAT. 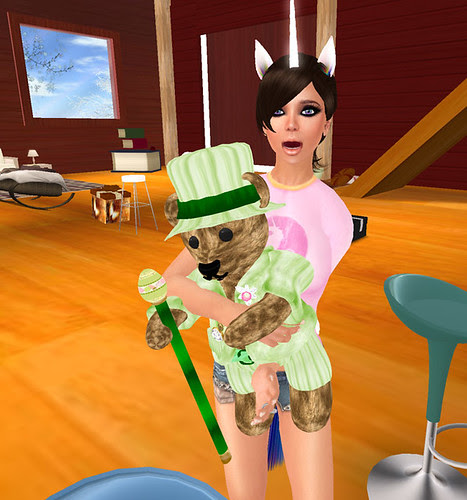 So congrats, Coull Creations. You made the first "Oh what the hell?" post of the Bunny Hop.

Posted by Alicia Chenaux at 1:38 PM

omg...I haven't got there yet but I was at one store looking forever for s super tiny egg that had a bunch of sculpt textures in it >.>....LOL I'm starting to not like these hunts ...

Wow. Does that guy want to lose every last customer he ever might have had?? I can't believe anyone would do that. It is bad enough when they hide it in an impossible to find place...but to put out decoys that you are charging for?

Yeah...no. I will never shop at that store.

Maybe they were charging because they thought that people needed to buy empty Egg decorations for thier homes, and were just being helpful. ..Or not... Great post, made me grin, the pics rocked.

OMG. I am so glad you called them out!

I will never understand why shops do not want you to find their hunt items. Shop owners: I am not looking at your merchandise when I am hunting. I am only looking for the hunt item. Making them harder to find does not make me buy your items. In fact, it makes me mad and that feeling transfers to the way I feel about your store - basic Consumer Behavior 101.

My first thought was, what a scumbag move.

My second thought was, well.. it IS Easter time, and maybe these eggs are meant as decor or even gift boxes. I could see that.. if I'm going to give the store owner the benefit of the doubt. I thought about making eggs to sell, myself.

HOWEVER. Assuming they are intended as Easter decorations or gift boxes, the store owner really should put them all together in one spot, CLEARLY labeled with huge signs warning that this is not the hunt item.

When I was in the Peace On Earth hunt, I had several people in one day buy one of my round vases that, when not fully rezzed, COULD be mistaken as the globe since they had similar colors. But once I figured out what was going on, I sent every single person a notecard with an apology, and a full refund of their money. And then I removed that particular vase from my store until after the hunt.

Since then, I myself am very careful about checking before I complete the transaction, during hunts. But yeah.. thats kind of sketchy.. I imagine the Bunny Hop group chat is blowing up.

During the Kissed hunt, I accidentally lag-bought a big red lips-shaped sofa for L800...oops! (The owner was kind enough to give me store credit) Now I make sure things rez fully before I buy and pay close attention to the price on these hunts. More newbies are going to have 25L in their account than 800L, though, and not think to check the price before clicking. I think it's a mean-spirited thing Coull is doing, and I certainly won't shop there.

shame on that store! the hunt should have people looking out for those kinds of stores...it won't look good on their reputation if they do that.

ouch! i wonder how many people accidentally bought those?

If I added up how much I've spent on fauxbies over my time in SL it would give me a headache. Usually it's my own fault for being click happy but I'd be one who would fall for this.

It turned out to be a huge mistake, and the owner of the store was refunding people who IM'd her. They were meant to be sold as decorations.