Wow, what a weekend.

Oh man, what a weekend. LOL 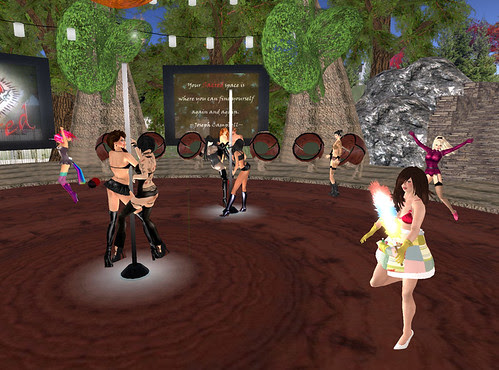 I'm pretty sure Nikki's getting checked out. She recently revamped her shape, and I think she's hot as hell. Don't you? 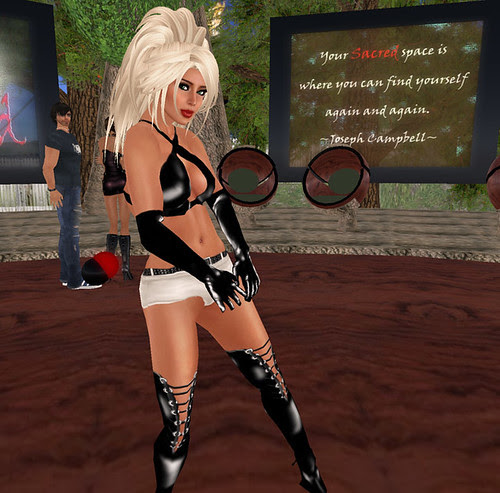 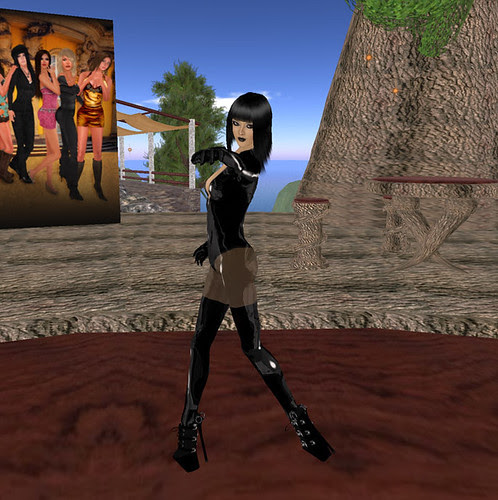 The party was really super fun, as it always is. I logged out finally around 3am and at 3:30 I was struck with a pain like I've never felt before. I grew up reading medical textbooks [my mom was a nurse until I was about 12] so I knew that it was in my left kidney. After pacing around in pain and crying, I finally woke RLBF up and he got me in the car and he broke all speed zones and got me to the hospital in record time. We were both pretty sure, with all my pain and everything, that I had a kidney stone.

After an hour of waiting in the ER for an available bed to open [thank god I wasn't really dying, right?], I pee in a cup and they get me tucked into bed in that ridiculous hospital gown that sure as hell wasn't covering my big backside up. LOL Our awesome Nurse Gene started an IV thing on me just in case they had to use it. RLBF didn't want to see it, but I never have minded getting blood drawn or anything like that. Growing up around hospitals and medical stuff, a little needle with a hose sticking out of my arm doesn't bug me. LOL

My doctor was pretty much awesome too, and he said that I was most likely passing a kidney stone [the pain had almost all gone away after I'd used the bathroom] but I did have to go in for a CT scan.

Let me just stop right there and say that I've never been honestly sick before. Flus, colds, strep throat, that's minor really. I've never had an IV before and I've only had 2 x-rays taken ever. So I was a little worried when they said I had to have this done, but not overly much. My body thought otherwise, though, and I was trembling like a leaf in the wind. LOL

This nice blonde guy wheeled me to the scan room, got me on the table thing, and before I knew it I was sliding in and out like I was a cake pan for the Easy Bake Oven. Then he put me back in bed, covered me up, and wheeled me back to the room. I asked if I should be throwing candy out and waving, but he didn't seem amused.

Nurse Gene came back and said that I was dehydrated and so he started an IV on me, and gave me a heavy anti-inflammatory and a morphine push. I've never had morphine before in my life, so I didn't know what to expect. With most medications, I get sleepy. Like, crazy sleepy. Oh no, not with morphine. I started talking like it was my job. I hadn't felt so relaxed and at ease in about 10 years. I am used to feeling tense all the time and so being that relaxed, I felt like I could talk, I guess. LOL I honestly couldn't tell you WHAT I was talking about. I know at one point I was saying that I could be a doctor, but I'm not sure where I was going with that. But I'll tell ya what, I wasn't feeling any more pain, that's for damn sure.

So, turns out I did have a kidney stone. It's teensy, and it scraped me a bit on its way down, but the pain was over. They gave me 4 prescriptions for this and that, a referral to another doctor for a follow-up visit, and sent me on my drugged up merry way. RLBF got me home and as talkative as I still was, I called my mom and we talked for over 2 hours. She was upset I hadn't called when we first went in, but I didn't want to worry her and the hospital staff really didn't need a little Latina woman screaming at them. Because she would have. Totally.

Thank you all so much to those of you who have been so kind with your prayers and good thoughts and get well gifts and calls and everything. It really means a lot to me and I hate that I had to worry anyone. I'm honestly fine now, although I'm a little sore on the left side if I sit too long. I have to go to the doctor on Friday just to make sure everything is still good, but I do feel 10 times better, so the visit should be a short one.

Oh, and the funny thing? As I was waiting at the ER, some guy came in with a kidney stone too! Except he was pacing around, asking if he could get anything for the pain [he couldn't], and then wondering if he could have a beer. I almost said brother, you don't need another beer tonight, because you reek of it. LOL Right before I'd gotten called in to the room, he'd looked at me and said "You're handling this a lot better than I am."

Man, Alicia. That sounds heavy.
Glad to hear you're up and about and blogging about it already :)

Wow! Glad you're doing so well. Yes, you are strong; no doubts about that.
*hugs*

Actually, you're right. We are. Glad you came throught well.