I've been sitting here in SL tonight, mostly staying in the same place, while I read. I'm on the second book of The Morganville Vampires series. After wasting time actually getting through the groan-inducing Twilight series, I've stayed far away from anything vampire. At least, of the young adult variety. But this is really quite good. The main character, Claire, has more personality than Bella Swan could ever hope to have. Mix in a very evil skank bitch Mean Girl, a bunch of vampires, a handsome ghost, and some pretty awesome roommates - well, I've been hooked from page one.

But, of course, reading doesn't lend for a very interesting SL time. So I opened up the Showcase and found a garden type place to go called The Greenhouse. Of course, I got caught up in reading while I was out there and ended up staying in one pose for about an hour, but since no one was there, it was pretty much okay. :) 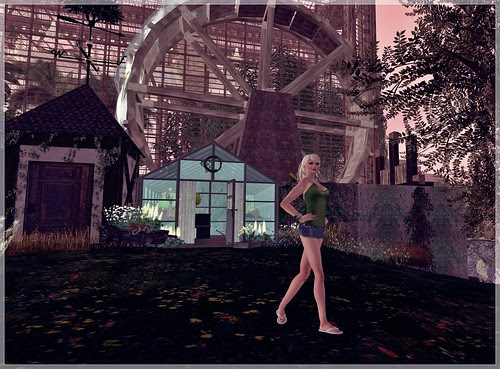 Ali, you said the magic words vampires and books. I am so running over to the bookstore tonight =D !