Putting a Z on the end of something doesn't make it awesome.

The following is simply an opinion post based on about 45 minutes today. This does not reflect the opinions of anyone else but me. But should you have an opinion on the topic, feel free to comment.

Last night during the whole "OMG SL IS DOWN!" time, someone mentioned InWorldz. What is InWorldz? It's basically an SL knockoff. If you ever wondered what SL was back in the day - the day being about 2005-2006, well, give it a try.

I couldn't get in last night, so I thought I'd give it another try today. I finally got in and almost cried. I was SO UGLY. My friend Misty was there, so at least I wasn't greeted by nothing. But - UGLY!! Pat, one of the InWorldz mentors, ushered me over to the freebies area, where we promptly sunk into the megaprim floor because apparently no one knows that megaprims are usually phantom & maybe someone should just - I dunno - uncheck the phantom box.

EDIT: Having been back in tonight, which I will discuss tomorrow, it's not what I thought it was. The physics are completely messed up. Even something simple like sitting on a prim is ridiculous and broken. 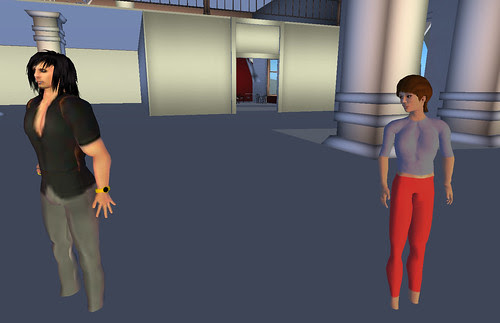 Yeah, that's me, with the system hair, linebacker shoulders, and huge feet...well, if you could SEE my feet. Which, you know, you can't since we're sunk into the floor.

My first course of action was to get pretty again. Well, as pretty as I could without the help of my gorgeous Belleza skins and my amazing Truth hair and all my beautiful clothes and shoes from SL designers. I told Pat that I'm pretty in SL. He said they'd get me prettier in InWorldz.

At least, not with what was available on the walls. Of course, when I tried to buy something, I crashed. Misty told me to use Rainbow to log in again, and so I did, and it was a little better.

I had to hop up on a stand to try to fix myself, because trying to just fix up like I would do in SL had me floating across the floor. Insane. 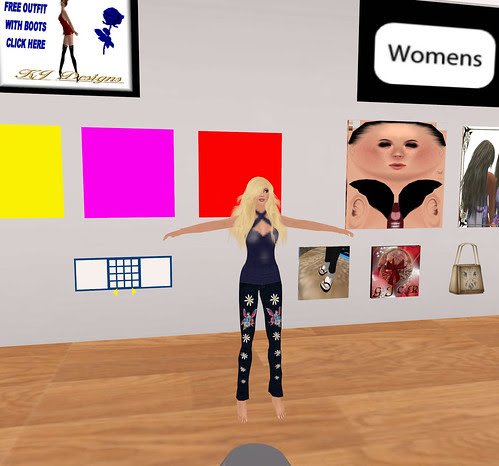 Flipping back and forth from SL, where my alt was wearing my shape [and probably laughing at my misfortune], I plugged in the numbers for my shape. At the freebies store, there was a box full of Eloh and Sezmra modded skins. I already know none of Eloh's skins have ever ever looked good on me, but luckily the Sezmra skins are not TOO horrible on my shape.

Now I know what you're saying. I could have just fixed up an entirely new shape to fit a skin. But I LOVE my avatar in SL. It's me. I've worked on it for 2 and a half years. It's mine. If I was going to be in this new place, I wanted to be ME.

I picked the one semi-decent blonde hair off the wall [ugh] and tried to find some clothes that weren't going to make me cry. There were no decent shoes, so barefoot was going to have to do.

After I managed to get at least passable, I attempted to go outside to the "bar" where a few people were hanging out. It took a few minutes to get there. The lag was horrible. I heard that it's not normally that bad. But if it was THAT bad with only 20 or so people online? Umm, yeah. I did the rubber band walk [I was snapping back every few steps] and did manage to make it to where people were.

No one talked to me. 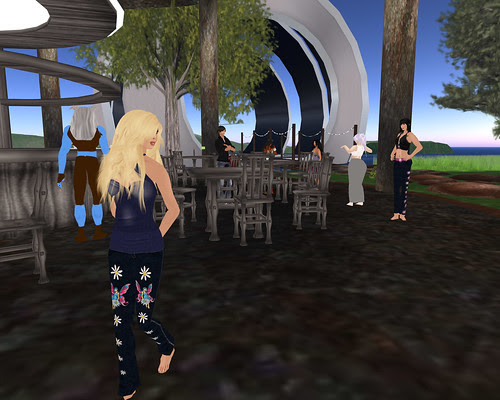 There was another mentor there, plus the "founder" of InWorldz, and a few others. But no one said anything to me. I saw a map and tried to make my way to it, but I started walking off into nothing, then crashed. I didn't go back in.

I might - MIGHT - try it again, if I get some of my buddies to go in with me, or if I'm super bored. But as I told Pat, SL is my home. You might visit other places in life, but nothing beats going home.

I'm sorry no one talked to you. By the time you were done, I think you crashed before I could get back. The floor you sunk in wasn't because it is a mega prim. It was because it's in OS and has goofy things that occur, like occasional floor sinking, your hair will flip through all the styles that you tried on that day at region crossing sometimes, etc (that makes me laugh).

Although the world looks like SL...it won't behave like SL. Certain scripts just don't work and others do...the basis of it behaves a bit different, etc.

IW is just over a year old....so there are a few glitches along the way and most likely why the founder didn't say anything to you. She was extremely busy yesterday fixing a few things that occurred through the night. Their CS is amazing since they are very hands on and try to give as much personal service as they can.

One of the things that I do like about it, is the glitches. I laugh every day there because it's not perfect and better yet, doesn't claim to be perfect. Is it for everyone? Probably not.

For some that are so used to the stability of SL (pardon while I cough :P ) and the fact that the designers in SL have had years to learn their art versus IW which is newer with not as many designers....it might be hard for someone seeking an actual duplicate of what they experience currently. At least until more Sl designers want to expand their user base and try out other worlds with their products

That is already starting to happen but it is a slow process. Most of the designers you and I are comfortable with have a huge following and a very firm product in SL. They make money in SL and doing a sister store in another world possibly is scary to them. Not saying it is..just one of the many theory's I have (which is why I started 'test the waters' a free area for designers to see how their products are receives in IW)

Anyway...I'm glad you gave it a chance. New worlds are fun for what they are....new. for a lot of us, they aren't really meant to be home...just a nice vacation spot to visit and enjoy.

BTW...if you can get Truth and Amacci to IW....I will give you my first born bunny. I kid you not! *doesn't mention the darn thing is buried 6 folders deep in her inventory*