I'm starting to feel a bit Christmas inspired. Or if not Christmas, then winter, definitely. I'm kind of itching to snowify the island, but I'm waiting until after Thanksgiving. But I want pretty show and a very magical winter wonderland type setting on our side of the island. I don't know what the others want on theirs, and it would be nice if I could change the terrain texture for just certain parts of the island! Unfortunately, since I can't, everyone has to deal with snow until New Year's. LOL Sorry!! Don't hate me and leave! :) But I think it should be fun, and I can't wait to try out the snowglobe tree that Aisuru made. It's SO pretty. I only got the beta test tree, so I can't wait to see what she does to the final product. When they're ready, all of you HAVE to go buy them at her store, Beloved Custom Designs because they're super unique and awesome.

Since Cen is taking a blogger break, I get to show this pic. :-p Earlier today she was 10 kinds of excited because she discovered SL Hockey. I'm not a huge hockey fan, although I was kind of into the whole Stanley Cup thingy back in 1999, and for some reason I had a crush on Jamie Langenbrunner. But I lost interest by the next year. Anyway, she had us come out to see the game. It was kind of neat, but you KNOW that has to be hard to play in SL because of the lag factor. Here's a picture I managed to catch after the ice rezzed in. 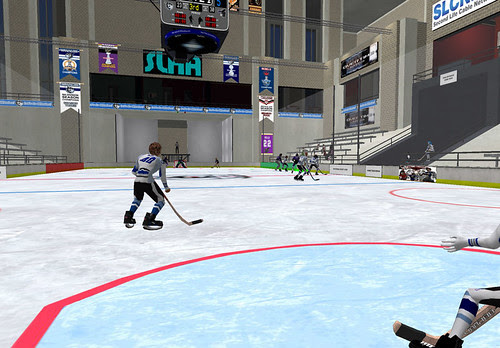 Speaking of cool stuff, I'm now busily setting up a winter area of our sky world. I think the new winter cabin from Mudshake is a necessity now. :)

Posted by Alicia Chenaux at 7:12 PM

Phew now I can talk about SL Hockey, thanks Ali (sorry I'm taking over your comments)

A long time ago I do remember someone, I think Wrath, telling me about SLHA, but it slipped my mind.

Tonight, completely by accident I found myself at the arena and a game was in progress.

THE most amazing thing I've EVER seen in SL. Seriously, even if you don't like Hockey, this was impressive. They even have a website for their league and you can see the game schedules

I also found out the games are shown with commentary on SLCN TV.

I can haz winterz too?