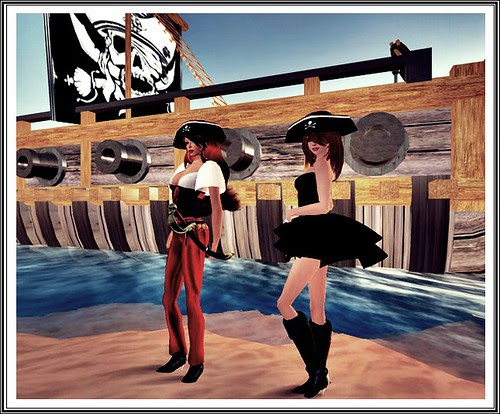 Party starts at 8pm SLT and will take place in the air above Aisuru's store, Beloved Custom Designs. :) I'll have the official SLurl for you all later.

Btw, those things we're wearing were found in the She's So Unusual treasure hunt. Head over there and take a look around! We're not actually wearing those outfits for the party, so don't worry. The hats were NOT found on the hunt [if anyone finds a hat out there, please let us know!] and were bought on OnRez for $10L.

Now I'm going back to staring at the demo skins from La Sylphide because the new line was just released about 2 hours ago. I LOVED the Ingrid line. I'm still trying to make up my mind on the Erin skin. There's just something that's keeping me from buying one and I can't figure out what it is.

Posted by Alicia Chenaux at 2:42 AM

I know how you feel about the skins. I LOVE my Dutch Touch skins and then she came out with a new one and I like it but there is just something about it that I don't really like and so I will probably not purchase them. She was generous enough to even give me a free one to try. I think it is just the skin on my particular shape.

I am so bummed that I have to miss the party -- but I am on a business trip until tomorrow night. I hope you all have a ton of fun!! Take lots of pictures!!