Well, it ain't Habitat for Humanity.

Wow. Plurk drama like a bad mama jama tonight, y'all. lmao If you're not on Plurk yet...I don't know how to even explain it. LOL

ANYWAY...In the middle of all the drama kinging & queening over there, I've been attempting to build a house. 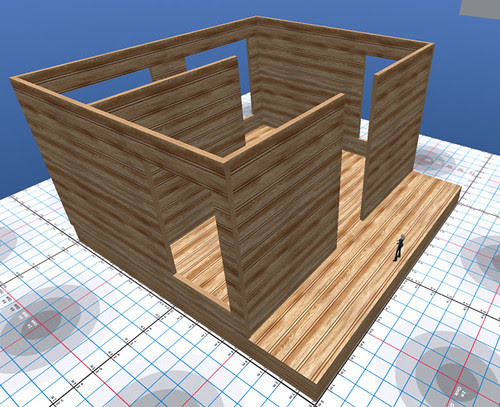 Yeah, it's all wood, shut up. LOL I built a little cabin once for the forest Levi and I had over the pit, but that was basically just a box. Check it out, I even put a WALL in there. Barnesworth Anubis, look out! LMFAO

But then I realized, "Hey, I have NO IDEA if this is even the size I want for the part of the island I want to put it!" So I linked it up and took it home and then threw it back down.

Um...it's a bit bigger than I wanted, but I think the size is still good for a rental home, which is what I hope it becomes. Then I started playing and I put a little deck type thingy on it. 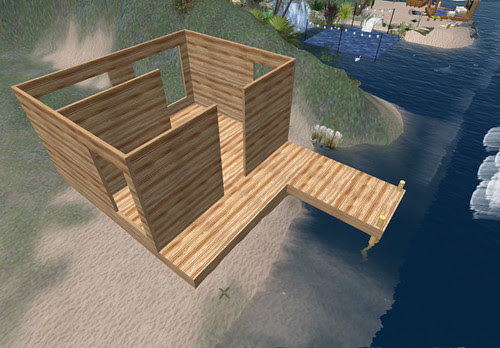 That's my project for tonight...trying to finish it. Or at least put a roof on the sucker. I want double doors for it and maybe a railing. I have like, infinity textures right now, so I guess it's just trying to see what goes and what doesn't.

Oh, and I actually went and bought something today that WASN'T on sale! :-O LOL I've been pretty bad lately about buying clothes. As in, I haven't been. I bought a few things at the Frangipani sale but most of my spending there was on hair. I just haven't been in the mood to look pretty, I guess. But I saw someone else wearing this sweater and I simply ADORE fall and winter clothes, so I had to have it. 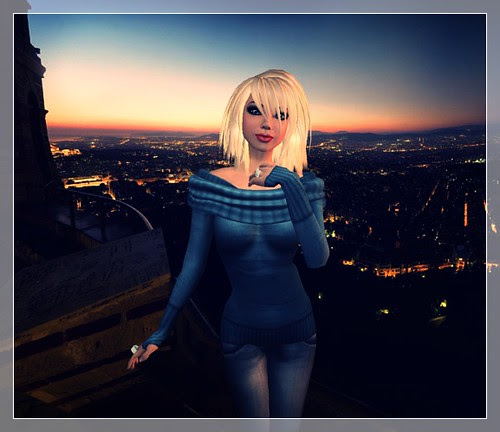 It comes with some little hand prims too, but they take my rings off, and I take my rings off for no sweater. I think it looks fine without them. :) And yes, I did try to reattach them but with as low as they fall on the hands, they move weird with my body. I may have to go back and pick up the wine colored one. I just LOVE Celestial Studios!!

Ok...I need a shower [I went for a jog earlier] and then I'm heading in world to work on my house some more.

Posted by Alicia Chenaux at 6:09 PM

that sweater is cute, I might have to look at that.