Before I get started, I wanted to thank those of you who have sent such sweet notes and IMs to me, even when you weren't sure what was wrong. It's too common in SL, and RL, to think that you're alone and that people really aren't noticing what's going on.

I already told my group, since they're usually the first people I turn to, so I figured I better go ahead and say it here as much as I don't want to do so.

Levi has decided to leave SL because he needs to concentrate on RL things. RL will always always always come first and should always be the first priority. As sad as I am by this, I understand completely and have tried my hardest to make his departure as easy as possible. He is the best guy I've ever met in SL, and knowing that we'll no longer be hanging out in SL talking and laughing has crushed me. But again, I understand why. I wish him absolutely nothing but luck, hope and happiness.

So where does this leave me? To say that I'm a little lost and sad would be a bit of an understatement at this point. I do have things to take care of, and will be branching out into an area that I never thought that I would, but it's hard for me to think I don't have him to ask advice from anymore.

Someone told me once, a long time ago, to "fake it until you make it." That's what I've been attempting to do in most of my public outings [well, all 4 times I've left the island so far], or on plurk. Just realize that although I may be laughing or looking like things are ok, they're not ok just yet. I have faith that they will be again, though. I am keeping busy. I have signed on to be a helper at Starting Point. I've already made my plans to close the store, revamp things, make new things, and learn more about what I already know basics of. This Wednesday's party will go on as planned, possibly at my home. I do NOT - absolutely do NOT - plan on dating in SL for a long long long long long time. I just want to hang out with my friends.

And...that's pretty much the story. I don't know how much more I'll talk about it in this blog. Probably not much because I guess there's not much more to say. 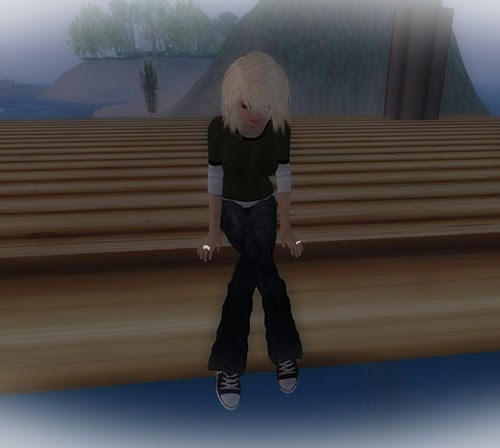 Posted by Alicia Chenaux at 9:28 AM