I thought there was a dress code over at the Seven club? Because I was looking at pictures from the Homme party and someone was there in coochie cutter shorts and thigh high boots. I'm not sayin' it's bad...I'm just sayin'. LOL

Last night I was working on a room in the skybox when I thought, "You know, a bedroom set would look SO GOOD in that one room near the fireplace." Not that I have need of a bedroom. Heck, I barely have need of the living room that I've set up since I just seem to sit on the counter of what is supposed to be a kitchen area most of the time, if I'm not just standing around on the beach doing nothing. But I think I was bored and listening to the group chatter on and on about their new homes that they're setting up made me feel like I should be doing something rather than just putting a picture up on the wall.

When I had been out at Mudhoney stalking the lucky chair for a beach house [which turned out to be too huge for me] a few days ago, my eye had fallen on this bed that was sitting there in the bargains section. I loved the colors, but I just didn't know where it would go or how it would fit into the skybox. We have pillows and rugs up in the loft, and I plan on putting in some home office furniture into another room. Not needing a bed at all, I just let it pass me by. But last night I was out there again looking for a papasan chair and I just kept coming back to this bed. After looking around, I finally saw how I could have the bed and make it work in the room.

So I bought the bed, 2 prints for the wall, a chest of drawers [or "chester drawers," if you're from the South], a little uneven table, a vase with some flowers, and a magazine basket. I hopped home and started to set everything up, then put some of my favorite pictures on the wall and poof. I was done. 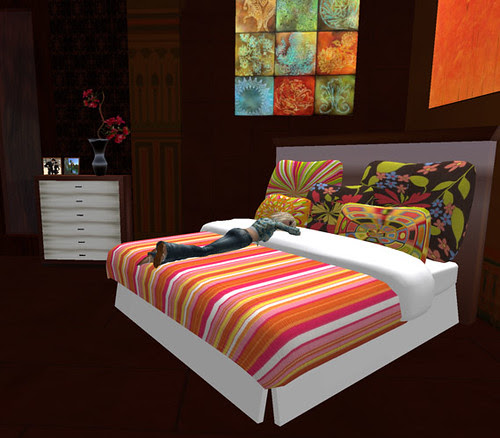 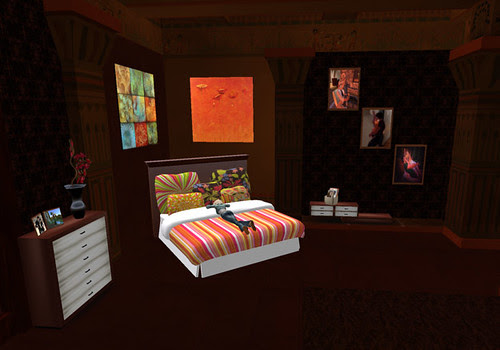 The best part? I only spent $195L last night. :) If you want to get REAL technical, the entire thing is $245L because of the pictures, but who gets that technical with pics that are months old? :-p

I plan on going out to +mudshake later and see if I can't find a chair and a rug to match the colors in the room. But for someone who is not really good at decorating, I'm pleased with what I've done. There's a good chance I'll only be in the room once in a while, because I do all my building work and inventory sorting while sitting on the kitchen counter or standing on the beach, but at least I know that there's a nicely decorated room in the place where I can sit and think.

My next step, since I DO spend so much time sitting on the kitchen counter, is to create a lovely warm kitchen. When I was little, we were constantly in the kitchen - whether it was at home, my aunts' houses, or my grandma's house. I'd like to recreate something like that here in SL because I think it'll make me feel better.

Posted by Alicia Chenaux at 9:53 AM

I love how your bedroom came out! It is so cute!!!