As I mentioned a couple of blog posts ago, I have some news. But I didn't want to say anything because it's not completely my news to share, and because nothing was official. But, since it is now, and because I've been given the green light...

Well, we'll start at the beginning. :) Almost a month ago I was out with someone buying dances one night very late and I got a random IM. Random IMs aren't unusual for me, as I'm sure they're not unusual for most of us in the blog world. People IM me to let me know of sales, or just to say they like this blog. It's always very nice, and so when I got this random IM, I expected it to be one of those. It wasn't. It was just from a guy that happened to read my profile and liked the movie quote I had on my 1st Life tab. I just couldn't stop talking to him. I knew it was kind of rude, since I was with another guy that night, but we just had the best conversation. It's hard to walk away from someone you can actually talk to.

The next day, he sent me skates. I'm still not exactly sure why he did, but I love those skates. LOL

We talked more as the days went on, except for the days he'd barely even say hi to me because he thought I was busy. :-p One evening, we sat outside of my store and had a voice chat. It was then that I decided that I was crushing on him. A lot. :) I just didn't really want to say a whole lot, I guess. Didn't want to scare him, and I didn't want to scare myself. We've talked about so much, SL and RL things, and we just seem to really understand each other. 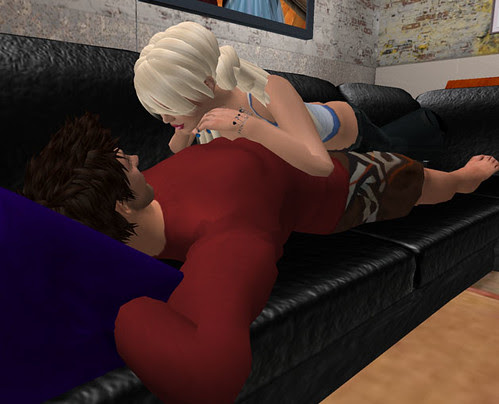 Anyone need a Virgin shirt?

Aaaaaaaaawww that is such a lovely, sweet story, congratulations you guys :D

Awww this is awesome news, I'm very very happy for you, Alicia! Congratulations!

Oh noes - is that going to cut into your shopping time?? ;-)

Wait, have we seen pictures of you skating?

As if you don't already stay up waaay too late, I guess you've got an even better excuse now!

OMG!! How cute!! I love this! I will send Jerremy over with a box of SLondoms right away! (Although it sounds like it is too late. :-P) Is he coming to the Blogger party? I am so happy for you!!

You guys can make-out in our romantic kissing garden all you want to! It is in my picks!

Does he read your blog?

I know you've never seen me before, but I just recently started reading, and you've been through the same feelings I have when I joined blahblahblah...

But I'm really happy for you! He seems like a really nice guy, if you can just talk and such about different things, RL and SL, and so on...

Phew, thank goodness that is out, I was about to bust a vessel holding it all in.

Now that you two are an "item" I can gladly give up my duties as the anti-chaperone, but just in case I will keep the bananas and whip cream within arms reach.

See you at the party tonight.

Ahhh let's see, if I remember correctly(it has been some time since "new love" for me)...

2. you're laughing AT EVERYTHING

3. you're talking to yourself a lot, asking why you CAN'T STOP SMILING AND LAUGHING

Hey, can you bottle it pullezz and share? kthxbai