There's two reasons for the title of this post. First, you all know that I've been using the Release Candidate viewer since mid-January, and with the exception of one release, I've not had any problems. Tonight I was prompted to download a new RC viewer. 1.20-whatever. Couple of good things, like double-tap running and the "Dazzle" interface. Couple of bad things, like the Friends dropdown list on the map is GONE, and the "Dazzle" interface. Yes, it goes on the good and bad list. Now for the most part, I like the buttons and everything. I think it's kind of cool. But the light blue is SO bright, it was like staring into a lamp. Of course, if I had the light on in this room, I guess it may not have been so bad. :-p But at any rate, it's just very bright. I used it for about an hour, no problems at all, no lag, etc. The light blue was just too much for my eyes, so I gave up my beloved RC viewer and moved to the main one. It's just like what I had before, so no problems. Hopefully there will be more skins available for the new viewer soon, because while I could get used to the light blue, I kind of don't feel like I should have to ruin my eyes on it. And I don't like not having the dropdown friends thing on my map - even though only 2 people let me map them, and one of them is NEVER ONLINE. [cough cough]

Second part of what hurt my eyes tonight took place in my favorite sim of Pillow Talk. I was there looking around and what do I see but someone in a tacky outfit, and her partner, who apparently thought that being totally naked was a fine way to go shopping. 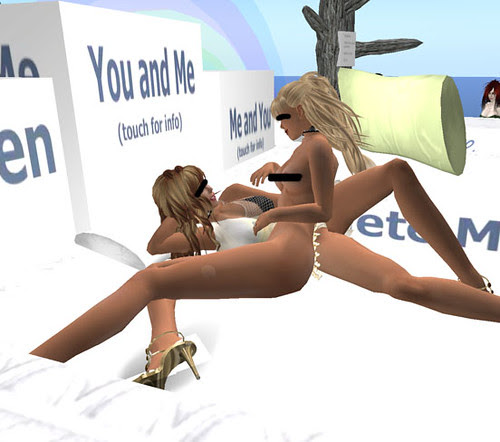 What the hell? You don't go out like that. Put on at least some panties. No one wants to see your pubes hanging out. I waited for a while to see if she was wearing prim silks that hadn't rezzed, but 10 minutes later, she was still totally naked. That's just a person with no class.

To get away from her boobs, I went down to the ground, where I prefer to shop anyway when I'm at Pillow Talk. I was laying on a rock and I noticed a girl come down on the pillow. First I was struck by how pretty her face was, but then I looked down. 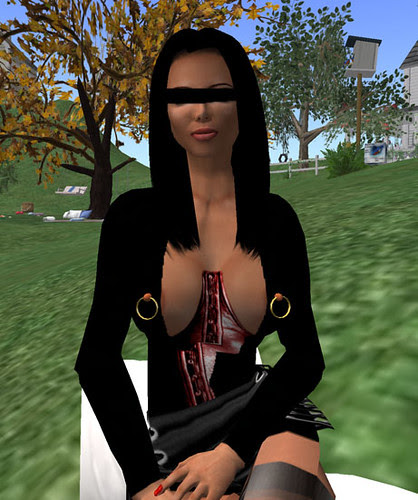 As if it wasn't bad enough that she has her nipple rings outside of her shirt, she's got the prim nipples out there too. What did she do? Cut two holes in her top? Such a waste of a pretty face.

And a big thanks to Kristianne Matfield for giving me the tip about setting my hair to full bright to get rid of the ugly seam line! I was able to wear my hair from Minnu today without being annoyed by the line. Of course, I had a pineapple on my head for most of the evening, but still. No seam! :)

I need to find something to do.

Posted by Alicia Chenaux at 9:20 PM

Somebody in the SL forums created a different skin for Dazzle. Here's the link:
http://forums.secondlife.com/showthread.php?t=252301
(with download link, installation instructions and everything)

Wow, if I ran into as many bare breasts as you did in one evening, I might log on more often!! Who knew?? I'm starting to see the allure of going out shopping, now.
;-)

The new RC sounded like they had incorporated some decent changes - but I'm still never going to like those new icons at the top of the screen to indicate no build, no script, etc! I can't even draw but I know I could come up with better icons than that, sheesh! And since I was in no hurry to look at the bright blue viewer again, I haven't tried out the latest release yet. Besides, you're doing a great job beta testing it for me. ;-)

LOL Alicia, you make me laugh!! I have to check in often just to read your blog. So glad Casius shared your blog and Tymmerie's with me. Keep up the good work!

Quaintly - Thanks for the tip! I like the way that looks in the picture a lot more than that blinding blue.

Wrath - Well then, I don't think I'll be beta testing for you anymore then, if that's going to keep you from logging in. :-p AND you have to log in and go out shopping if you expect to see all the naked girls running around.

Margo - Thanks. :) I try to be entertaining. I'm glad it works sometimes. LOL!

You're welcome! Glad it worked! Of course, at night, you've got glow-y hair, but oh well...

You know my issue with the RC? It's impossible to tell what tab you're on... like, in inventory between the "Recent" items and your standard inventory. And in your chat window with all the IM's... it used to be obvious when a tab had a "new message" but now I can't even tell which one I'm on. I credit it to the bright thing you speak about. And I HATE it.

Maybe it's a sign that I should stop multi-tasking the way that I do and actually engage in those conversations so I'll know when there's a new message - but, oh well!