I'm so tired tonight. I shouldn't be, but I am. Tired and quiet.

Today we had a Guns n Roses tribute band up at Liquid Rage. It was so fun! I wasn't able to go for much of the last tribute band we had up there, but this time was just crazy fun. Here's a few pics. 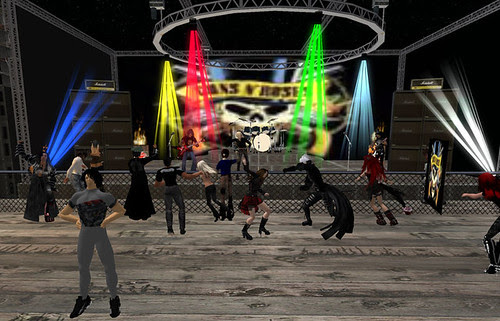 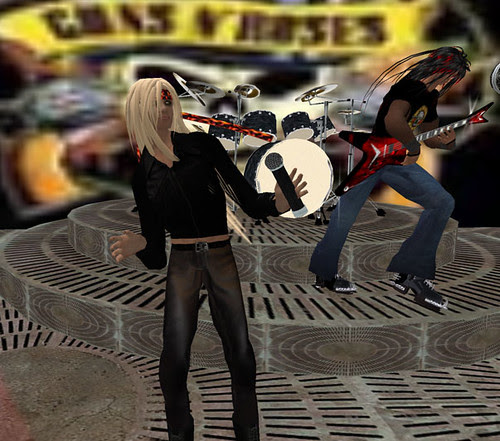 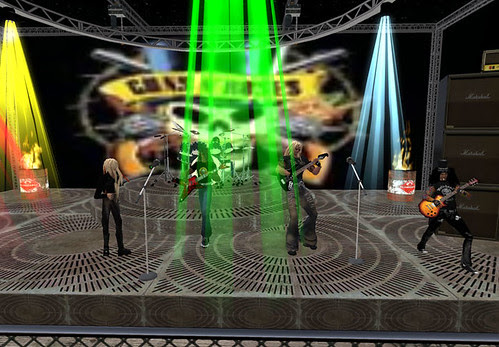 If anyone is looking for a DJ job, IM me in-world so I can give you an application or a LM so you can go check the place out.

Not sure why, but I'm feeling kind of overwhelmed with the whole "business" aspect of SL lately. I talk to a lot of business people in SL on a day to day basis and it's always the same. Traffic is the big thing for a lot of people. But if you really look at the high traffic places, they all have a common theme. Camping, freebies, and free sex. It doesn't mean they're awesome places. It doesn't mean that there's anything there worth looking at. It just means someone can foot the bill for a full sim of zombies, or that they don't mind naked noobs running around boinking each other on cheap poseballs. A lot of vendors only seem to want to rent in a very high traffic area, and then wonder why they don't sell anything. Because the people there are usually bots or they aren't there to shop!! If I were going to rent a place somewhere else for my store, I wouldn't rent in a place just because they had super high traffic. I'd rent in a place that has REAL traffic. Real people who come in because they like a place. Just my two cents.

Not that I've actually had the time or the creative energy to work on my own products lately. :-p Ok, so I do have time usually. But there is a certain amount of passion you need to muster up before beginning a project, or pulling something out to work on. I've had a design for a chain necklace in my head for almost a month now, but yet when I went to work on it yesterday, I just couldn't do it.

[I did, however, spend a happy hour a few days ago making a very primmy birthday cake hat. So it's not that I don't want to build. Apparently it's that I want to make things that are completely useless.]

I was waiting to see if SOMEONE would wake up early, but I guess he's not. :-p I'm going to bed. I want to go out and get some sun later. I was watching Sunset Tan earlier and I realized how pale I am. But I'd rather be tan than orange. Besides, I read recently that caffeine can kill sun damaged cells. I must be set!

Posted by Alicia Chenaux at 4:40 AM