Mr. Kitty has a terrible vice. He LOVES to grab the roll of paper towels and just go to town. I'm staring at a half ripped up roll of towels on the living room floor. I know I should be mad at him...but he's just so darn cute when he's playing with it!!

I was at Awesome Designs the other day and something struck me. Do you have to have a big butt to shop there??? 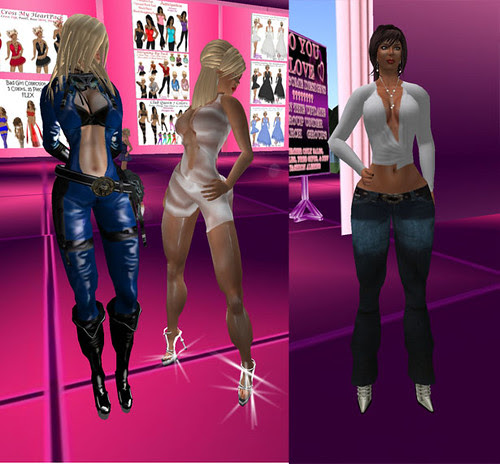 Also, that blingy girl wearing the shoes I hate is wearing what I THINK is supposed to go along with a skirt, but with all that oil she's greased herself up with, she looks like a walking oil slick because of the fabric of her outfit. LOL

We have this bodega on the grounds of The Viper Pit. I'm sure you've all seen it before, since it's freely available. Cen and I went in there yesterday. I think she's found a new job. :-D 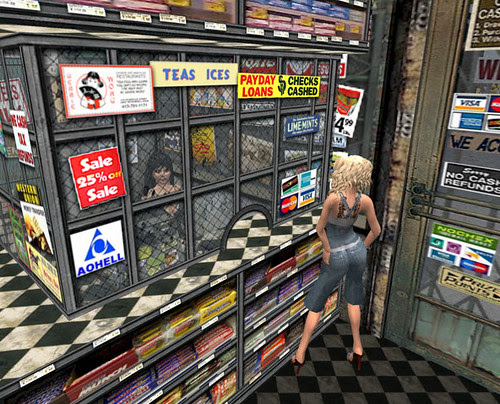 Oh, and for some reason, this picture cracks me up. Especially with ZZ being armed. LOL I love those posters. I changed mine and put a donut texture on it that I'd planned on using for some build that I've discarded, so I was holding a giant donut later. LOL And now for my BIG news. :) Levi and I decided to live together!! He's always at my place anyway, so it was just the natural next step. :) I should have taken a picture last night after we decided it, but I was pretty tired, so I kinda forgot. He took a couple for Snapzilla, but I'll wait and ask if I can share his Snapzilla with you guys. My backside looks really great in one of the pics!

I've got some cleaning up to do before settling down for the night, so I better find some "cleaning up" music and get to work.

Posted by Alicia Chenaux at 4:49 PM

Tym - Thank you! And yes...once we get out of the "let's just stay home and lay on each other" thing, I'll be showing him around. ;)

you're a doll, Alicia.. can ya send me a Levi-clone as well! *bwahahahahaha* ;D

Oh Gawd.....I still haven't gotten out of that stage with Jerremy yet. We could actually get some really impressive things accomplished if we could just manage to get off of one another for 5 minutes. Love is such a beautiful thing....sigh.