My cheeks hurt. lol More on that later.

Time's up for submitting an app to be in THE AMAZING DATE GAME. Thanks to everyone who sent in cards! Cen is going to be picking the finalists soon and so if you're chosen to go on a date with me, you'll be notified probably within the week. I was originally going to do a post after each date, but I think that there's just going to be one big post about it, so be looking for that in the near future!

As to why my cheeks hurt... Yours would too if you had a smile on your face for hours. I don't really want to say a whole lot so that I don't jinx anything, but let's just say that sometimes you stumble into something so good when you least expect it, and then you wonder where it's been this whole time. :)

Anyway, so I was at Shiny Things tonight with my friend Levi because he's a guy and guys need help picking out shoes. But when he TPed me in, I couldn't see any shoes because instead, this rezzed in front of me. 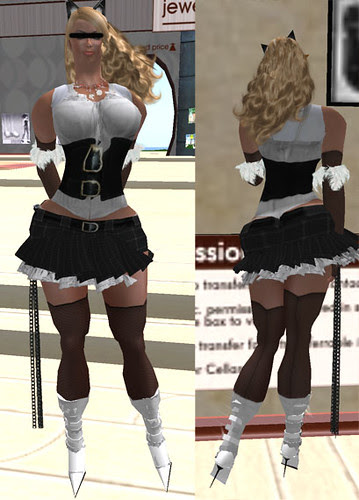 I didn't think it was possible to make a GothiCatz outfit look bad, but I guess I was mistaken. This "woman" is wearing an outfit that I myself own, but the corset buckle on mine never stretched like that! Not to mention she's added feathered armbands, she's a neko without a tail, those boots are WAY too small for her legs, and what's going on with that shape anyway?! Her buddy was also proportioned pretty badly, with massive shoulders and a tiny waist, much like Johnny Bravo. We headed out to a "Mafia Madness" event after that little bit of fun. I think it's amazingly funny that most men somehow think "mafia" equals "pimp." I thought we were pretty hot, though. We probably would have won the contest, had we stayed. 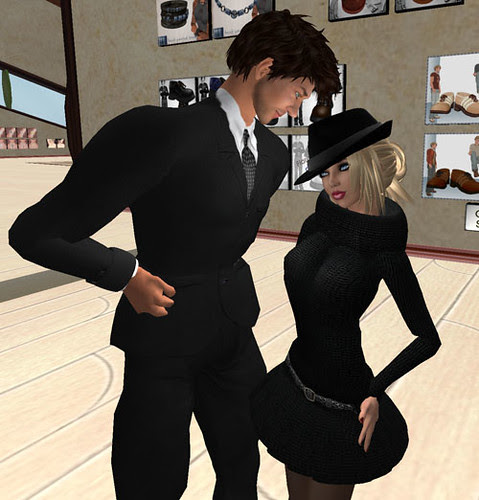 We didn't stay too long at the contest because I wasn't really into hearing hard rock/metal, plus I didn't want to be there if one of my bosses came in and caught the DJ playing some rap. LOL Rap and pop are pretty much forbidden at the club, although I've gotten around it before. We headed to the pit to dance to nice music, but then I felt bad for Levi as he had to listen to Cen, Rick and me as we discussed land stuff. We've had to change groups because someone else is paying the tier while Sam is away and...oh, it's a big annoyance, really. I had to run through today and make sure that EVERY prim I have on the land was set to the new group. I did find a metal ring that I'd lost while building some time ago, so that was good. lol But any man that can handle me around my family is a good man indeed. :) Even when Rick is breathing down our necks. ;) 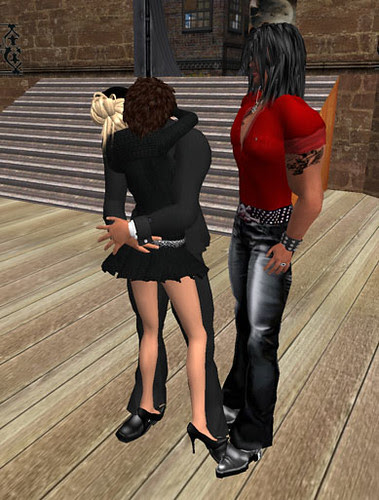 3 hours of pajama time and lots of chatting and laughing later, and my cheeks hurt. :) I'm going to bed to let my face rest!

Posted by Alicia Chenaux at 3:01 AM