So I have to say a big thanks to QueenKellee Kuu for suggesting the Charlize ponytail at Aden, and another big thanks to Tristan Micheline for scouting it out and telling me about it! I like Aden's hair and have a couple of styles from there already, but I'd forgotten to go there when I was on my ponytail hunt. Usually I go to the Aden at Tuli's store, but Tristan gave me a landmark to the Aden store at Renneville Square [SLurl], and I'm glad she did! What a great little shopping center! Really well done and virtually lag free, which is always a plus. [Well, it was lag free until I walked back into the Aden store and there was a mermaid floating and suddenly I was walking in molasses. But it seemed to clear up when she took her fins off...so maybe her fins were just a wee too scripted.]

I didn't end up picking the Charlize ponytail. I liked it, but it made the top of my head look odd for some reason, and I wasn't sure if I'd be able to modify it without totally screwing it up. :-p I really liked the Milla hair, but unfortunately it has the problem that almost all ponytails of that style seem to have. 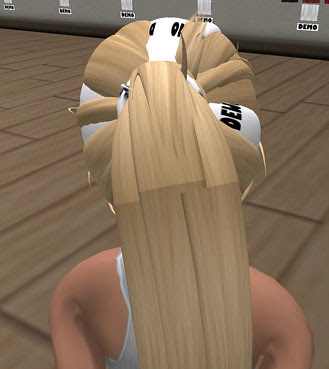 The seam line. This is TOTALLY not Aden's fault at all, I have other hair with this problem and I don't see any way around it unless sculpties are used. It's not always very noticeable on darker shades, either, so don't let that stop you from buying it if you're a brunette!

I did end up with the Sarah ponytail, which I love! It's so cute. If you've never tried hair from Aden, you have to. There's not a LOT of styles, but the ones that are up are unbelievably cute.

After I bought my hair, I went walking around the shopping center. There were a lot of really cute shops that I'd never heard of before, like Heartattack & Vine, where I picked up this adorable shirt for $60L. 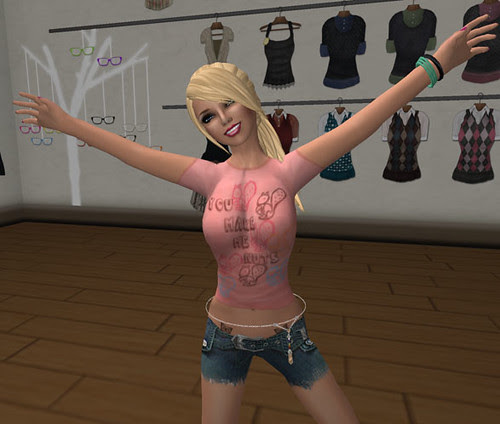 If you can't read it, it says "You make me nuts." So cute! As you can see on the wall, there are other great shirts, and on another wall there are mens clothes. 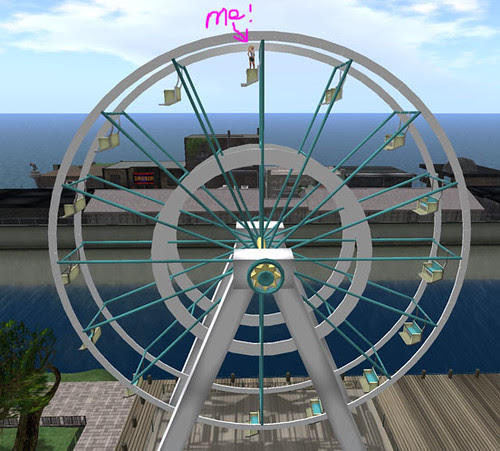 I'm glad that I did go to the top, because I noticed ANOTHER shopping center on the other side. A more grungy shopping center! All you have to do is cross the bridge and you're on the "wrong" side of the tracks. :) Of course, the almost only pink thing in the place caught my eye and I ran over. 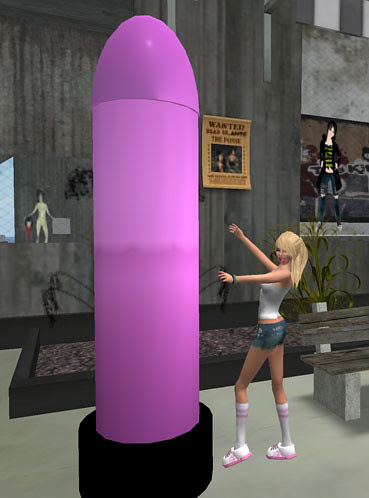 It's a lipstick, right? :) If you go visit, be careful of the hole in the ground. You could get lost wandering the surprisingly clean sewers.

So I'm happy with my new ponytail, and very happy I found a new place to spend my "hard" earned $L in. :)

Posted by Alicia Chenaux at 6:08 PM

I bought a ponytail during the Wrong sale and loved it (Style 1, their styles don't have names). But I bought it in brown. Didn't like the blonde colour. So I'm afraid I don't have any suggestions :(

I bought a hairstyle from Wrong during their sale, but yeah, their blonde shade isn't very good. At least, not on me. It's kind of a weird blonde, almost like the blonde at Maitreya, which I'm not all that fond of either.

It was kind of orange-ish. They didn't have colour demos, so I had to wing it (I bought Style 2 in blonde) but after trying it on, I didn't like it! Luckily it was on discount :P