The mystery revealed, and the hunt is on!

Oh I should have been in bed hours ago. LOL It's just so nice to do things late late at night when lag is minimal and you can shop and hunt with ease.

As promised, the mystery designer is now revealed!! 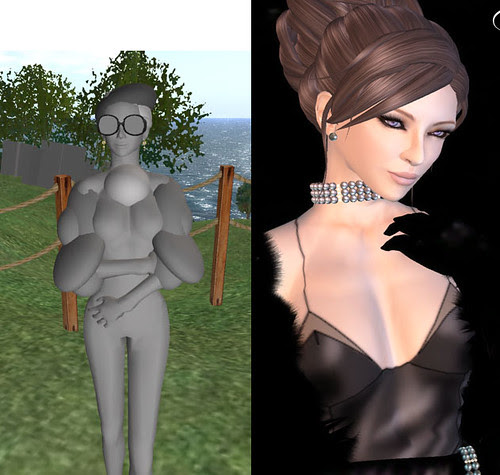 It was none other than Caliah Lyon of Muse Fine Jewelry! I think she has probably one of the most beautiful avatars I've ever seen, so seeing her as a big gray blob was so sad. LOL If you've never seen her jewelry...oh gosh, you're missing out. It's so delicate and beautiful. I've been to her store to gawk at her excellent primwork a couple of times and every time I wear this fine gold necklace she'd given as a gift at some point, I'm just awed by how teensy she gets those prims. Say what you want about the wonder of sculpties, but someone who can really work a prim gets my respect instantly!

So as I told my group tonight, there's another gridwide treasure hunt going on this week. The Red Stick Animation Festival Hunt has about 50 designers participating. A few of the stores I hit tonight didn't have their sticks out yet [bad lil designers!] but the ones that did, it was fairly easy to find most of them. It's just some red cylinders, nothing fancy, and they're easy to spot in most stores. Some of the designers just have one stick, some have 2, and Teagan Blackthorne of Style Your Destiny outdid herself with 14 sticks! [At least, 14 that I found. Maybe there was more.] Best part is that some of the designers have things for guys too. SYD has a male skin in one of the sticks, and Nicky Ree gave the guys a great sweater set. The best part is that the absolutely lush sweater looks awesome on girls too. The girls gift there is a great bikini with matching shorts, very pretty! SecondWave Apparel has 1 stick with a great little jeans set complete with tank tops and a jacket. TULI has 2 sticks, 1 with some fantastic henna tattoos, and 1 with a skin! The tatts are GREAT. Very sexy!! Aphrodite Creations has 10 sticks with shoes and clothes. There's sticks at my absolute favorite-of-the-moment store Earthstones, but I only found one, and for some reason it was $1L. There's supposed to be 7 sticks there, and trust me, I don't mind paying $1L for them - if only I can find them! LOL

The hunt goes on all week, so I'll be hitting stores each night until I make my way through them all. But always late at night, so I don't get trampled by crazy hunters. :) I gave my group the notecard that has all the landmarks on it, but you can probably get one from any of the fashion groups, or just go to the hunt starting point and pick one up. [SLurl]

Posted by Alicia Chenaux at 3:41 AM